Never have I wasted so much time and energy on a Facebook page. You people exhausted every piece of my energy fighting you about Joe Flacco vs Lamar Jackson. Where we are both wrong is that it is not our decision. Every Baltimore Ravens’ fan page on the book has people throwing shade at Joe and Lamar concerning who should start.

On one side of the argument are the people stuck in 2012 and who believe Joe Flacco is the truth and he will bring this team to another super bowl if he can just get to January to become this miraculous uni-brow-powered “January Joe”. There is only one problem. The team is 4-4, and it’s partially because of his poor performances. Flacco Lovers everywhere are living on the glory season of post season 2012 and 2014 when Joe-Cool was at his best.

Team-Flacco has in instilled in their minds that it will never be better than what Flacco has brought to Baltimore. They fear the dark years of Kyle Boller will return with the entry of a new signal caller without the #5 on his back. Joe had a September to remember, as he faced minimal competition on defense outside of the Cincinnati Bengals. Once team Joe saw this explosion of offense, they began to go even crazier in Flacco nation, stating that Jackson is a bust and will never see the light of day. Oh but enter October.

Level of competition went up

October was not such a fruitful month as he only scored four times and had four interceptions. I get that there are receivers on the other end of the ball dropping passes and a defense labeled as top-tier that has been getting roasted on the back end. However, when it comes to keeping pace with the opponent, Joe Flacco has a job to do, and he has not done it. According to NFL.com, the 11-year vet has gone 37 games without a game-winning drive. There is even the excuse that is the go-to of the O-line not helping Flacco out that the average Waccko for Flacco fan will break the glass for emergency and pull out to debate.

The good news about Flacco is when his feet have been close to the fire, he has come out and produced big. I believe all jobs are safe Sunday against the Pittsburgh Steelers because of this fact.

On the other side of the house, there are the Lamar Jackson fans who have been watching Flacco for years and are just plain tired of the mediocrity. They’ve heard all off-season of how this is going to be Joe’s best year ever and how Lamar can’t throw (supposedly), and how he needs to sit back and learn for a year. I can tell you as a Lamar Jackson fan I am annoyed.

We believe that Steve Bisciotti banged the table for Jackson for a reason and that reason is Joe Flacco is not the future of this team. Had Joe produced the last season against top tier teams, I wouldn’t even be writing this article because Lamar would be starting for the Miami Dolphins or playing for the New Orleans Saints right about now.

Lamar has shown flashes and trash displays in his early moments of this rookie season for him. One could argue he had a terrible preseason start but progressed as the weeks went by. Other haters will mention that he cannot throw and base it off of an errant pass to Willie Snead on third-and-one last Sunday. However, there was a beautiful pass across the middle in the fourth quarter where the rook connected with another fellow rookie first-round pick, Hayden Hurst for six. Yes, the game was over, but the message was clear. Jackson has abilities that some fans are interested in seeing more of in the very near future.

Fans can be rude at times, but that freedom of speech is something we all cherish and exercise. Both sides took to Facebook for a battle of piss, vinegar, and text about their thoughts. Fans started even printing out shirts that had this on it. 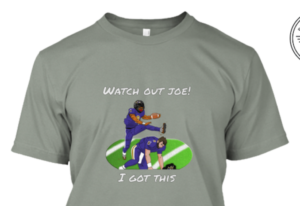 Many comments were racist and just plain mean about the young talent, who depending on the outcome of Sunday’s game against Pittsburgh just might be starting against Cincinnati coming up after the Bye-Week.

LJ8 has all of the intangibles to be a great QB in this league. Sure there is a learning curve that he will have to go through but Baltimore may for the first time in a while have exciting offensive football to watch on Sundays.

We could sit back and argue stats vs. Lamar’s maturity all day. The point is we have no control, and we’re just stating our opinions. There are no fake fans vs true fans. There are only fans with opinions. Baltimore is going to do what’s best for Baltimore, and I hope when the smoke clears and the civil war is over, that RavensNation stands tall together supporting whatever decision the team goes with at signal caller for the future. CAW! CAW!

Eagles Across the Pond Recap, Thoughts and Analysis