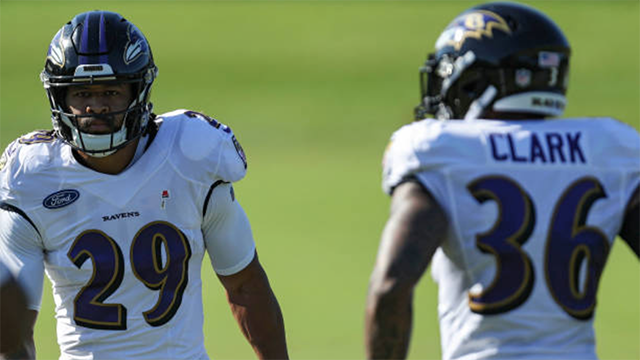 So, who’s job is it? Earl is gone due to conduct detrimental to the team. Yes, there are landing destinations to talk about for Earl. There is the issue of 10 Million dollars to discuss. However, the question that lingers for me is, who takes the Baltimore Ravens’ starting Safety job? Who lines up next to the cerebral Chuck Clark? Everyone is going to have their opinions. Here is one from Jeff Zrebiec of The Athletic:

Think Elliott would get the first shot. Geno Stone would probably become the No.3 safety, and they could use Jimmy Smith some in safety looks. I also wouldn’t rule out a vet signing although not ton available. Could go familiarity with a guy like Brandon Carr

Let’s take a look at the options.

Ryan Mink of BR.Com made it clear he does not see #22 playing safety full time. I agree with that statement because of his ability to provide such depth to the CBs outside. Jimmy locked down some of the bigger playmakers on the outside last season. There no reason to believe the Ravens will completely set aside his abilities to give bigger playmakers headaches. With the former 1st round pick not starting a playing a full season since 2015, I believe spelling him at both CB and Safety will benefit the team as well as him.

Here’s a guy I was excited about since the draft. Mike Rimmers of PFF reports

I believe the way the young rookie has impressed the last couple of days at camp, he has a shot at competing for more time at the position. According to BR.com he captured an interception late in Friday’s Sure, his 40-time was 4.62, but what he lacks in top speed he makes up for in vision and decision making.

He nabbed his first pick in practice on 3-on-3 drills against Jaleel Scott to stop a TD. There’s nothing but great things to come with this rising star. However, until he can absorb more of the playbook, I see him splitting reps with this next guy.

There’s been so much hype about this guy last 2-years only to be disappointed with injuries to the forearm (2018) and knee (2019). The Ravens must view him as a starter if they are willing to send ET to the wind. Take a look at a few of his highlights. You’ll see he is always around the ball.

If the “Joker” can stay healthy, I believe with his size, soft hands, and ability to track the ball, the team can have full confidence in the former Longhorn’s ability to start.

FANTASY FOOTBALL: TOP TIER WRS AND GUYS TO SNATCH UP

FANTASY FOOTBALL: TOP TIER QBS AND GUYS TO SNATCH UP