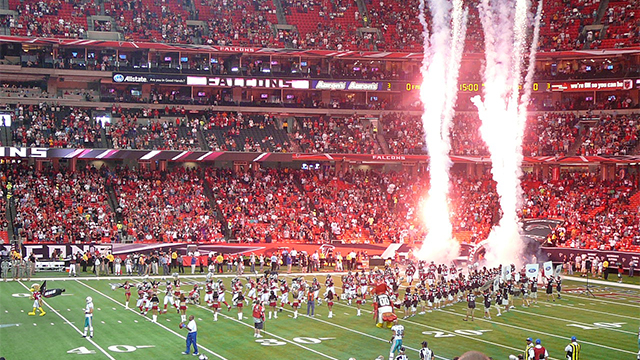 A 3-1 preseason for the Atlanta Falcons is an impressive start but can this stride carry over to the regular season? After such a disappointing dress rehearsal, one has to think that the Carolina Panthers may be the Kings of the South for just a little while longer. We are very aware of what Julio Jones and Matt Ryan are capable of. You can even see flashes of Devonta Freeman’s potential. What we don’t immediately see, is the other side of the ball.

For me, it boils down to defense. This unit ranked 6th in total defense in the preseason. I know! It’s preseason, but I have to grab justification from somewhere. I certainly can’t grab from last year’s dismal stats.

Arian Foster was a true test to this Falcon D; he was held to 10-yards on five carries. Sure, he had some open field action (2 catches for 20-yards), but the credit goes to a defense that held him to 2.0-YPG. It’s easy to be caught up in an NFL highlight reel that appears one sided. The only problem I did see on film was one that surfaced last year. The team needs to work on tackling. When you can’t break down and tackle a guy in open space or even use the sideline as your friend, you’re in for problems. Keanu Neal got flat out embarrassed on the one big run by Foster in P-Game 3. Additionally, both Robert Griffin III and Ryan Tannehill broke for huge gains early in P-Game 2 and 3.

The debut against the Washington Redskins was not very convincing of this either. R. Kelley (not the singer) ran seven times for 40-yards and a TD in the absence of Matt Jones, who left with an AC sprain. If you’re giving up that much to backups this early, then how is that going to look in the regular season?

On a Positive Note…

However, I am a believer the pass rush. Vic Beasley looks scary with the amount of pressure he is putting on QBs. According to Rotoworld.com, the team is focusing on getting that pressure turned into sacks:

“Falcons DL coach Bryan Cox said they must find a way to turn Vic Beasley’s QB hurries into sacks.
Pressure is production, so Beasley’s 33 hurries and five QB hits as a rookie are nothing to scoff at, but Atlanta wants more than the four sacks Beasley was able to manage. Beasley is expected to move to SAM linebacker in the base defense, but most of his snaps will likely come off the edge as a rusher. Beasley’s 33 hurries were 12th-most among 48 qualified 4-3 ends last season.”

There is nowhere to go but up for this unit, considering that they were dead last in sacks in 2015 with 19. The addition of Courtney Upshaw to push the pile should help this squad increase the pain on QBs.

If you notice, the problem is not in the skies for these birds; it is in the trenches. This game is not like war. In war, if you control the skies you can rule the ground. However, in football, it is the exact opposite. If ATL can shore up the problems on the ground with sound tackling lane control and more pressure in the trenches, they should have a promising 2016.

Listen, if you want to hear the same of sports talk, go to ESPN where they report on the same stories all day every day. If you are truly looking to listen in on ORIGINAL SPORTS PERSPECTIVE from our couch to yours, tune into our podcast here.

Packers vs Jaguars: A closer game than you think