Eagles’ Draft: Did you get your guy? 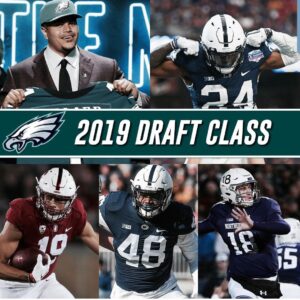 Andre Dillard – Big and athletic. He should fit in immediately as a backup LT and eventually replace JP as the LT. Once he becomes a dependable run blocker the offensive line should continue to dominate without JP.

Miles Sanders – Dual threat RB with size and speed. Good vision to knife his way through the hole and enough speed to bounce it outside. He can also go in the slot and run routes. Catching the ball won’t be a concern for him either. The Eagles will ease him in but I expect him to leapfrog Corey Clement as that 2nd RB option and eventually take over for Jordan Howard, as the Eagles redo their RB position.

JJ Arcega-Whiteside – A big body possession WR. He excels at vertical routes. A former basketball player, so he treats passes like getting a rebound. He only runs a limited amount of routes, but the ones he runs best are the ones the Eagles use. He’s got great hands and is really strong catching the ball. My guess is he was drafted because the Eagles don’t have long term plans for Alshon Jeffery. He’ll be a backup this year and probably thrust into the starting lineup next season.

Shareef Miller – Big, strong and raw. A local kid with alot of ability, he just needs time to learn techniques. He comes in with pretty much one pass rush move. The bull rush. It works for him but in the NFL you need more. Expect him to battle with Josh Sweat, Daeshon Hall and Joe Ostman for that DE spot on the 2nd unit.

Clayton Thorson – The Eagles love a project at QB and Clayton is the latest. Strong arm, functional mobility to move in the pocket. Thorson goes through his progressions rather quickly. There’s something to work with there. His accuracy is off and his mechanics need work. Eagles probably slot him at 3rd string QB and watch him develop over the years.

Did DeCosta’s Draft Please One Particular Ravens Fan This Year?