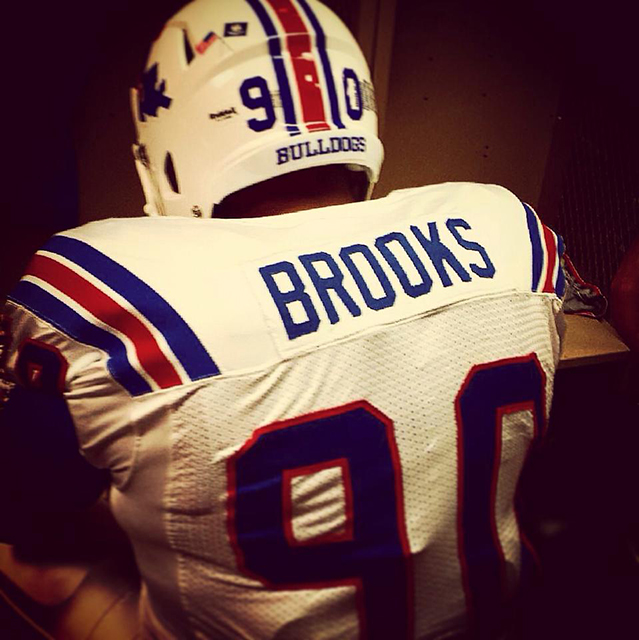 I have always been a fan of the underdog, the grinder, the 53rd man who slides onto rosters at the end of the third preseason game and into the hearts of fans around the football world. With the NFL Draft just around the bend, some of the talent at the position of DT/DE position has been identified but for those of you who haven’t done your homework, there is a talented young man hailing from Bossier City, Louisiana.

DeAngelo Brooks or “D” as his friends and family call him, graduated from Airline High School where he began his football career. During his senior year of high school, Brooks was in the local paper normally, as he posted 71-tackles with 27.5 of them for loss as a DE/DT going on to receive the Shreveport Times Player of the Year Honors.

Brooks is not only a football player, he is a 2-time state wrestling champion. While this may be another sport, it speaks to his aggressiveness on the D-line.

Brooks then spent some time in Kilgore where he excelled once again, registering 102-tackles (77 solo) with 6-tackles for loss and 1.5-sacks in his two-year tenure. His notable gameplay bought him a full ride at LA Tech where he is currently finishing off his Bachelors degree. 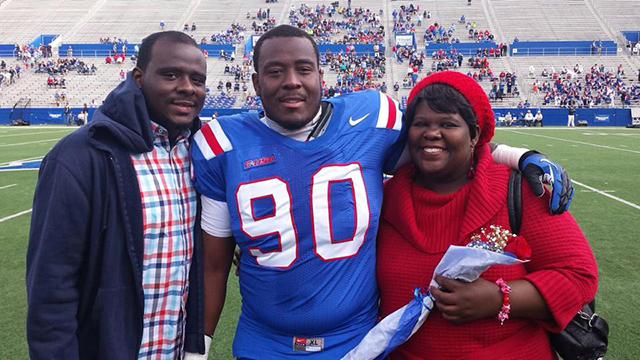 At LA Tech “D” continued to show promise by producing 5-tackles in his first game against Kansas in September 2013. His ability to stop the run is uncanny. At times, it appears that “D” is out of the play but with the quick use of his hands and raw power, Brooks manages to push himself and his opponent back into the play to make the tackle. This speaks to his 4-tackles for loss, 2-sacks and a forced fumble in minimum action in 2013. Did I mention this big boy has a 4.91 40-time? For a DT this guy can move! Just to give you an idea of what kind of speed we’re talking about, former Baltimore Ravens DT Terrence “Mount” Cody ran a 5.40 second 40.

What I love most about “D” is his vision and ability to break down in front of the ball-carrier to ensure he is in the best position to make the tackle. Brooks has the ability to disrupt plays, escorting opponents directly into running lanes.

As I continued to watch film on this young, stout, 6-1, 300 lb brawler, I saw him doing the dirty work of the inside DT. His presence sometimes commanded double-teams from Guards and Centers, which isn’t a recognizable stat on the ESPN charts but in my book it is something to look at on the next level.

I say this because on most NFL teams, the MLB is normally going to lead the team in tackles and that is primarily because of the “power pigs” in front of them, guiding the ball carrier to the inside. Brooks is one of those “power pigs” with a true team mentality. Granted when the opportunity comes, “D” will deliver a punishing, thunderous hit, laying all 300 lbs on his poor victim, but we all know the job of a DT and that is the nasty grind in the trenches. I applaud him because he knows his job and does it without worrying about the glory.

Now no player comes into the NFL as a complete product and while Brooks has major potential to excel at the next level, he will need a coach to work closely with him on his pass rushing ability. He tends to get swallowed up by bigger Tackles when rushing the passer. He is not meant to be on the outside with his size but should a stunt be called, he will need to be able to get by the “bookend” Tackles in the same manner he gets around and through the Guards and Centers.

DeAngelo Brooks is not yet a household name but if any team takes a chance on this young, hungry, coachable prospect, they will have a grinder that can fit well in a 3-4 defense and a guy who is about the overall team success.

Join the “90 Gang” on Facebook as he follows his dream.

Baltimore Ravens: Trade proposal for Cyprien a must