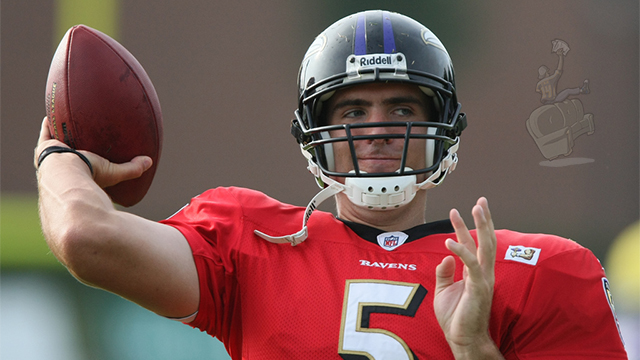 Wouldn’t it be great if Joe Flacco started airing it out this season? The loss of  Torrey Smith had a tremendous impact on the Baltimore Ravens. In his last year with Baltimore, Smith had 49-receptions for 767-yards and 11-touchdowns. Torrey’s absence has left a gaping hole. There was production but there was an element missing. In 2015, the Ravens had no choice but to play without the speed to stretch the field. The addition of Chris Givens was not as effective, as he only produced a 20-353-1-TD stat line.  As a result, Flacco and the offense suffered. Enter Mike Wallace.

Wallace is the next man up. In 2014 Mike caught 67-passes for 862-yards and 10-touchdowns with the Miami Dolphins. That is only 6-passes less than his career high of 72-receptions and 10 touchdowns in 2010 with the Pittsburgh Steelers. Wallace can help Flacco return to the offense that produced 344-completions and 3,986-yds for 27-touchdowns.

Make no mistake Wallace’s skills have not eroded. Neither Ryan Tannehill or Teddy Bridgewater have the arm of “Joe Cool”. Mike has the talent to be the number one receiver in Baltimore. Upon Wallace’s his signing of a two-year deal at the castle Coach John Harbaugh said of the former Viking:

“This is a guy that changes our offense dramatically. He adds an element that is just very important in the National Football League. He is a complete receiver. He has speed.” (Baltimore Ravens.com)

In fact, Wallace could prove to be Ozzie’s best off-season move. The 37-year-old Steve Smith Sr. has been a phenomenal receiver and one of the best to put on a Ravens’ uniform. However, the future Hall of Famer is in the final year of his contract, with plans to retire at the season’s end. Smith will be sorely missed, but Mike could help soften the blow left by his departure.

The Ravens are entering a major transition at receiver, and let’s face it the team doesn’t have the next “Dez Bryant” on the roster. Flacco needs Wallace to be the receiver that he was with the Steelers. When asked about Wallace’s signing, the former Super Bowl MVP stated:

“I’m planning on him coming in here and having a big impact on our football team and helping us win a lot of games”(baltimoreravens.com)

Joe Flacco is a gunslinger, and with speed on the outside, he is lethal. Mike Wallace may prove to be exactly what the doctor ordered.

Christopher was a writer for CRR. He has a BA in International Studies from the University of South Carolina with a concentration in Middle East Politics & Arabic. As an avid American football and auto racing fan, Mr. DuVall is interested in a career in radio or TV. He is also the father of two wonderful children.