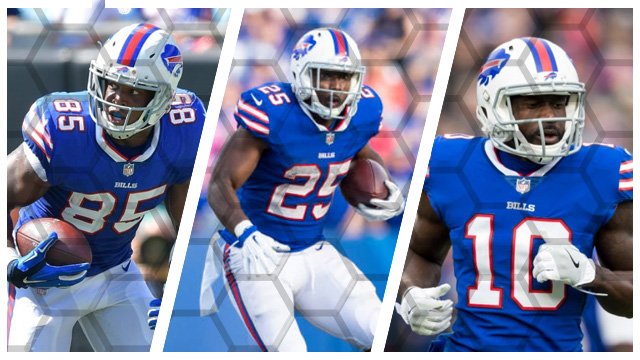 Good morning fellow couch riders! I come to you today after about a week in deliberation, wondering how I should approach the issue of my main man Tyrod Taylor. I have a bias towards the QB and get frustrated when the world does not see him the way I and a few other huge fans do. I’m sure you have followed the storylines the last few weeks of his benching and five Nate Peterman picks later, he’s back, at least for week 12 against the Kanas City Chiefs. This post is really not about the QB. Can the Buffalo Bills’ supporting cast step up to protect Taylor’s job?

While Clay has been injury prone this year; he usually is one of Taylor’s go-tos in the passing game because of his ability to get open across the middle downfield. Taylor was reliant on him Sunday in the QB’s second-half return from the bench. Clay caught three passes from Taylor for 27-yards in the Chargers’ beatdown they caught thanks to no defense and lousy Nate. This year has been slightly different for the 7-year player. Injuries and dropped passes have been the story for Tulsa Alumni. Clay even botched two opportunities last week to score due to an offensive pass interference penalty and a 13-yard drop. Charles, do better! Tyrod needs you. The task is cumbersome since the Chiefs have not given up a TD to a TE since week-8.

While this is not his only team this year, this is the only team he has posted a 100-yd game thanks to Tyrod. Thompson has world-class speed, which not too many people know about outside of Buffalo, Chicago, and Baltimore. According to draftproscout.com, Thompson ran a 4.31-40 at the combine and had used that speed primarily in the return game. Tyrod has been missing the element that blows the tops off of defenses since Sammy Watkins was sent packing. This Florida Burner can help with stretching the field for “T-mobile”. The Chiefs are ranked 28th in the league in passing yards allowed per game. There is no better time like the present to capitalize on this opportunity. Burn Deonte Burn!

I’ll be honest, I was pumped to see the Bills grab this gentleman out of a trade deal. I feel Matthews was pretty solid in Philly and primed to great things here in Buffalo. However between injuries and flat out poor outings, posting less than 25-yards in four of five games (Rotoworld), I’m not impressed. The good news is there is nowhere to look but up for the former Eagle. With Kelvin Benjamin sidelined due to a nasty knee injury from last week, Matthews will get a great deal of the workload, when Clay is not targeted. I hope that Matthews is healthy; if not then he needs to stay sidelined.

Oh, you didn’t think I would go there? Well, I did. Shady before Sunday hurt Tyrod more than anyone with is disastrous outings of less than 50-yards on the ground against both the Jets and the Saints. Without a solid ground game, the passing attack suffers due to the play action not selling. This factor is the main reason behind Tyrod’s benching. He has complimented very well with Shady’s monster ground-attack and to be expected to perform without it in an instant was just wrong. Should Tyrod be more than just a ground game reliant game manager? Yes, Taylor should be; but is he at the moment? No, Tyrod needs the consistent gameplan that worked earlier in the year to function again. The Bills’ offense rolls through Shady, and if he rolls then so will Tyrod.