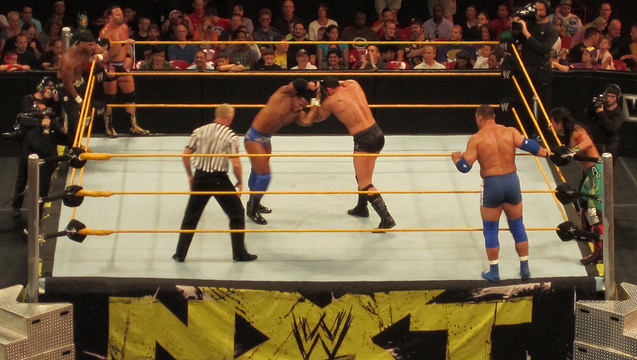 It can be said that the desire to be “first” is a unique human instinct. If you’ve ever found yourself cutting in line, darting out of your car toward a busy ATM or zooming through a green light with anticipated acceleration, then you know the feeling of being “first”.

This same rush of excitement is what WWE‘s NXT product brings to its audience. On a humid August Friday night (the 23rd to be exact), I had the pleasure and privilege to be one of the first to enter the Havert L. Fenn Center in Fort Pierce, FL to watch an NXT live show. Despite the small venue, I couldn’t help but feel like I was partaking of something grandiose in both size and stardom. After all, I had been watching these larger than life personalities on the WWE Network (for only $9.99, of course) for quite some time. The production was rather simple. There was no fancy announce table featuring Jerry “The King” Lawler, Michael Cole, and JBL. There were no Diet DEW bottles displayed for the purpose of shameless advertising. There were no elements to connote the grand scale spectacle that is WWE.

However, there was a charm in the air. There was a spark of electricity and a scent of greatness which permeated the makeshift arena. As I gazed upon the black and yellow ring apron bearing the three letters that are synonymous with superior wrestling performance, I knew it would be a night to remember.

From the opening bell which queued the contest between the comical Vaudevillains and the no-nonsense duo known as The Mechanics, I was absolutely enamored! My wife and daughter, who were both in attendance, yielded the highest of critical acclaim for each bout throughout the night. Though she had not previously viewed her work, my wife was thoroughly impressed with the “Bedazzled One” herself–Alexa Bliss.

Of course there were fan favorites such as “The Hype Man” Mojo Rawley in action. There were also unexpected impressions made by up-and-coming NXT Divas Carmella and Kendall Skye. I couldn’t restrain myself from shouting “Finisher Her!” to Skye (in my lowest baritone voice), as she bore a striking resemblance to Sonya Blade from the Mortal Kombat franchise. Kalisto and Solomon Crowe most definitely delivered a spot on performance as well. However, one of the best bouts on the card came in the form of Charlotte versus Bayley. These two ladies know their characters and tell a perfect story in the ring.

Conversely, I would be hard-pressed not to mention my favorite NXT Tag Team of Enzo Amore and Collin Cassidy. Believe it or not, these two are the reason why I purchased a ticket. Enzo’s mic skills are superb and it was an honor to be in his presence and watch him work. He can’t help but elicit a thunderous crowd reaction and as any good fan should know by now: “You Can’t Teach That!” Couple the above with Big Cass’ “S-A-W-F-T…SAWFT!” and you’ve got a winning combination.

On the contrary, the majority of kudos for the night go to Tyler Breeze, Sami Zayn, Tyson Kidd, and the NXT Champion—Adrian Neville. These four guys put on a clinic for professional wrestlers that would have been worthy of any Wrestlemania match card. Each and every one of these superstars is poised, polished, and ready for the grandest stage of them all.

All in all, NXT didn’t require a host of fancy production and shining lights to garner my praises. If anything, NXT reminds of what it means to be a wrestling fan. True professional wrestling fans are a unique gaggle of individuals who believe in might and magic, heroes and villains, and that good will [for the most part] triumph over evil. NXT has brought back the connection that WWE once lost with its fan base. NXT fans get to discover greatness. We get to see our favorites superstars and divas ply their craft at the ground level. We get to see them shine for a small fee before they make it to the “big time”, where the ticket price is practically ungodly. Simply stated, NXT fans get to be first for a change.

Brian Jemison is the self-proclaimed World Fan Champion of sports entertainment. As a lifelong fan of professional wrestling, Brian has viewed hundreds of hours of wrestling footage from around the world. His practical and insightful commentary will certainly stir your passion for all that goes in within the squared circle. Be sure to follow him on Twitter under the username @worldfanchamp.

Kyle Juszczyk is NOT a Fullback

John Cena: Best In The Business or Best...

WWE’s Money In The Bank Features Lots of...

Will Seth Rollins Evolve to Become WWE’s next...

Bray Wyatt to Pave the Way for Brighter...