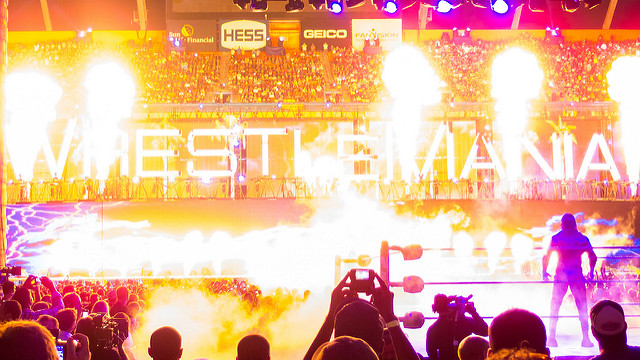 Last night at AT&T Stadium in Dallas, Texas, the world saw WWE‘s greatest show of the year, Wrestlemania 32. There were a lot of surprises and some disappointments if you’re a fan like myself.

Let’s start with addressing that AJ Styles lost to Chris Jericho in his Wrestlemania debut after he appeared to be and built up to win the match. My thoughts on the match are that these two proven veterans put on one of the best matches of the night.

Having someone the caliber of AJ Styles in WWE and at the grandest stage of them all Wrestlemania was a surreal feeling for me considering I’ve watched him wrestle for different wrestling companies throughout the years that I’ve been a fan.

Having Jericho win though doesn’t sit well with me after just a few short years ago, Fandango beat Chris at Wrestlemania. So he can lose to him, but beat Chris Jericho in Styles’ Mania debut? Doesn’t make a ton of sense, but maybe we’ll find out what direction both these wrestlers are going tonight on RAW.

Another match that was outstanding and quite possibly the match of the night was the Shane McMahon versus the Undertaker inside Hell in a Cell. In what many thought could have been a flop, both these veterans brought their A game and gave the crowd in attendance and those watching around the world a show. We saw Shane McMahon climb to the top of the cage and fly from a good 20 feet in the air and crash through the announce table where Undertaker once lay before moving out of the way. This was the turning point in the match that swung it in favor of the Undertaker, but Shane showed his dedication to the WWE as a business and to his family in this bout.

Now with the Undertaker conquering Shane McMahon and presumably putting an end to the McMahon family feud, what will Vince McMahon have to say tonight on RAW?

Last night we also saw a No Holds Barred Street Fight between Dean Ambrose and Brock Lesnar with Lesnar prevailing in the end. The problem I had with this match was that they built up Ambrose with the different hard core legends “passing the torch” if you will and giving him all these different weapons. Then he goes out and pretty much gets man handled by Brock receiving over 13 suplexs and an F-5 onto a pile of chairs before being pinned. I wish the match would have been better, but I guess I should have expected what we got from it. Let’s see how Dean Ambrose responds to the throttling he received tonight on RAW and if he asks for a rematch. If I were him, I’d move on to other things.

Moving to the Women’s Division now. Last night we saw Hall of Famer Lita reveal a new WWE Women’s Championship belt before the Triple Threat match. It’s a new Era in Women’s wrestling and later in the night, Charlotte who was the former Divas champion is now the WWE Women’s Champion. The match between her, Sasha Banks and Becky Lynch was amazing. They definitely defined what is to come of the women’s division from this point forward. I’m curious to see what Sasha Banks and Becky Lynch will have to say on RAW after falling just short last night.

Then we saw some surprises last night. After The League of Nations defeated the New Day in a tag match, Wade Barrett got on mic and challenged anyone to fight them. Well, they didn’t quite expect who walked out. Legends Cactus Jack, Shawn Michaels and Stone Cold Steve Austin answered the call and came out to the ring and cleaned house. Each legend delivered their finishers to the four members of the League of Nations and then for good measure, Stone Cold delivered a stunner to New Day member Xavier Woods. It was an awesome moment and the crowd loved it. I know I loved seeing these three legends back in the ring at Wrestlemania.

Another surprise we got was when the Rock came out to talk and got interrupted by the Wyatt Family. The Wyatts were about to attack Dwayne Johnson when none other than John Cena’s music hit. John Cena ran down to the stage, after exclaiming that “It wouldn’t be Wrestlemania without me.” Cena and The Rock cleared the ring of the Wyatts to a standing ovation from the crowd. It was great to see Cena back early after he wasn’t expected back for a few months. Will he on RAW tonight? Will there be a confrontation between him, the Rock and the Wyatts? I guess we’ll have to wait and see.

And then the main event of the evening came a bit late since the show ran 45 minutes late, but when all was said and done we saw Roman Reigns conquer and pin the WWE World Heavyweight champion, Triple H and as expected win back the title. Now I know a lot of people aren’t fans of Roman Reigns, but maybe WWE should listen to the WWE Universe and embrace the hate and turn him heel then maybe they will finally be able to get things right with a character who they have struggled big time to get over with the fans.

What will Triple H and the Authority have to say about losing the WWE Championship tonight? Tune in to RAW at 8/7 pm central time to find out only on the USA Network!

Is Leonte Carroo a good fit for the Rams?

John Cena: Best In The Business or Best...

WWE’s Money In The Bank Features Lots of...

Will Seth Rollins Evolve to Become WWE’s next...

Bray Wyatt to Pave the Way for Brighter...