This was my Top 30 Big Board prior to the draft. I added the final column to show where that player actually got drafted as a reference.

So according to my personal rankings, the NBA GMs agreed with me on the top 6 picks. We differ on Markkanen and Monk apparently. I would take Malik Monk over Lauri Markkanen 100 times out of 100. Monk is going to be a bucket-getter in the NBA for the next 12 years. I told everyone that Jonathan Isaac was a top 6 player and I was proved correct. I also said Bam Adebayo was being severely underrated by all the mock drafts listing him as a late 1st or 2nd rounder.  He went in the lottery.

The other player I tried to tell everyone about was Josh Hart. Some people considered him an undrafted free agent candidate. That’s crazy talk. He’s a proven entity. He went in the 1st round to the Lakers. They made a good choice with that one.

The biggest reach of the draft in my opinion was Portland taking Zach Collins at #10. Call me crazy, but I don’t want to draft a guy in the Top 10 that didn’t start a single game in college. If you’re not good enough to start in college, what are the chances you are good enough to start in the NBA? Not likely. Collins is foul-prone with a limited upside.  Can you picture Zach Collins playing meaningful minutes in an NBA finals game in the current NBA?  I can’t.  He would get destroyed on pick-and-rolls.  Lauri Markkanen at #7 is also a reach in my opinion. I’m not sold on him.

The biggest steals of the draft were Malik Monk at #11 and OG Anunoby at #23. Jordan Bell at #38 was also good value, especially considering the team fit.  Golden State doesn’t need offense; but they would love some big man athleticism with rebounding and shot-blocking.  That describes Bell’s game exactly.  Malik Monk in Charlotte will be great. He is possibly the best pure scorer in the draft. I can’t believe he fell to #11. The Bulls at #7 or the Knicks at #8 should have jumped all over him and reaped the rewards. Instead they went with Euros.

Needless to say, the Minnesota Timberwolves were the big winners on draft night. Not because of who they drafted but because they traded for Jimmy Butler. Butler provides every single trait the Timberwolves need to progress to the next level: defense, toughness, veteran leadership, clutch scoring, etc. It was the perfect trade for Minnesota.

Chicago Bulls were losers on so many levels. Traded an All-NBA player for 2 flawed young players and then used the draft pick to reach for a 7-foot Finnish kid who only shoots 3s but can’t rebound or play D. Well done Bulls! 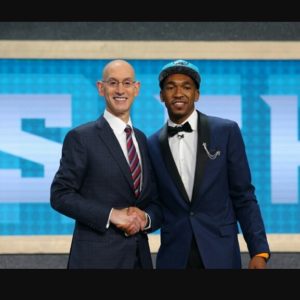