Who will emerge w/ Pitta done? 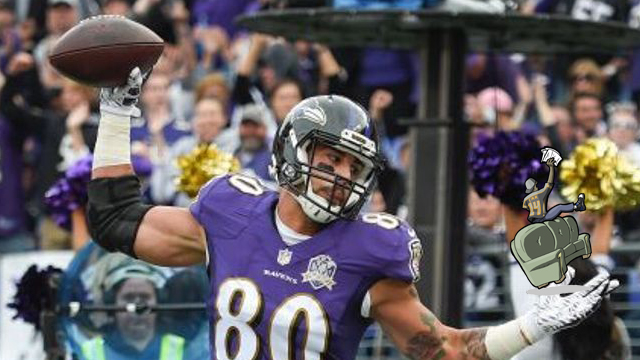 Who will emerge w/ Pitta done?

Baltimore is hurting folks. The team takes yet another hit with the recent news of Dennis Pitta’s final career ending hip injury. While the news is disheartening, some of us are wondering if the man who laid claim to the spot will actually claim it?

According to BR.com, Crockett Gillmore said this earlier in the year:

“I don’t want to come off the field. All downs, every down, and [I want to be] the guy…There’s no reason I shouldn’t be. There’s no reason I can’t be. That’s great we have nine tight ends. They’re going to enjoy the bench. That’s just reality. I’ll tell them. They know.”

Can you walk the talk?

Oh really? Well, Sir, the stage is set, the lights are not quite as bright as they will be, come September, but your very existence on this team depends on you being able to step up and make the other four TEs on this roster “Enjoy the bench”. Some people would call the statement above a check that he can’t cash. I call it truth now with Pitta down. There is the significant possibility that 110+ targets are coming the Bushland Texas Native’s way.

Is there really any Comp?

Let’s look at the competition. Ben Watson is so long in the tooth, his teeth are dragging on the floor. At 36, we cannot expect full gameplay out of such an old vet without injuries or him being pulled for blows during a drive. Another case of a sharp football mind but the body cannot keep up at that age.

Our next supposed candidate is primarily a blocking TE who served a ten game suspension for violation of the PED policy. Nick Boyle would have to play lights out to secure the starting Joe security blanket designation. He has too high of a hill to climb. Gillmore is simply better and has no history of PED use.

Crockett has so much upside to him because of the displays of flashes in 2015 before he broke his back in 2016, Sure, it was only 33-recs for 412-yds and 4 TDs but anyone being targeted 47 times obviously is on the radar. Only Maxx Williams was targeted one more time than Gillmore that season and for fewer yards (268). Even Yitzi Weiss of the Baltimore Beatdown had this to say about the three-year veteran:

“Gillmore is an above average run blocker, and he will be out there for alot of snaps. Which means he will have more opportunities to make plays than the other tight ends on the roster, who are not as good in this area.”

Williams is coming off of a knee injury which required a rare surgery not commonly performed according to BR.com. Maxx has not made it back to the field and is scheduled to return for training camp hopefully. He is not the answer.

That leaves Crockett with legitimate competition for the position against the “Redzone Bully” Darren Waller. Waller’s speed is scary but he cannot run-block as well as the more experienced TE Gillmore. Waller is still transitioning over to the TE spot from WR which is not always an easy crossover.

I truly believe that after the smoke clears and the dust settles that this battle has a clear winner and his name is none other than Crockett Gillmore.

Insights into the Most Polarizing 2017 NBA Draft Prospects