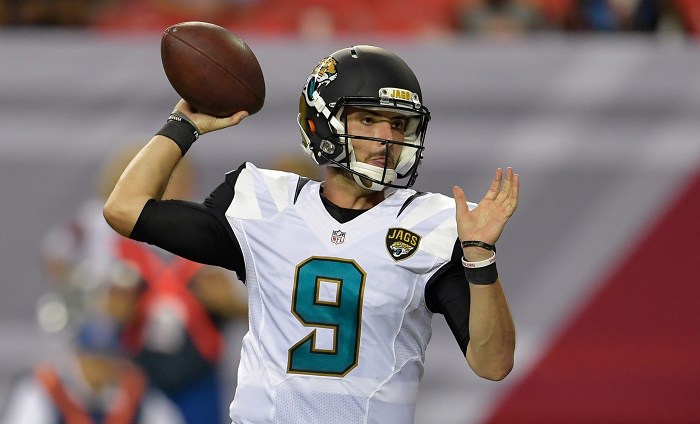 Two horses race? I thought there were three? What about Allen?

The Jacksonville Jaguars have been the typical “Scary Potential” team over the past few seasons. They have built their defense through the draft and free agency; the problem is the offense. Blake Bortles is heading into his fourth year in the league and has not lived up to being the 3rd overall pick. To be fair, Blake hasn’t been able to lean on a good running game or offensive line. Unlike the Tom Brady, Russell Wilson, and Dak Prescott’s of the world, Blake was on his own. Does that change the narrative of his career? NOOOOO!!!!

Captain Obvious: Blake is a bust!

How did Blake become the 3rd overall pick in 2014? He has ideal size, athletic ability, strong, decent arm strength, and the overly used Ben Roethlisberger comp!!! Blake came into the league with bad mechanics, a one read offense, and a shotgun-heavy offense. He currently holds an 11-34 win-loss record, that is PUTRID!!! Bortles has not improved in his 3-years in the league; he is frustrating to watch. In a joint practice session vs. their week two preseason opponent the Tampa Buccaneers, Bortles had another blunder on a pass. This blunder triggered this reaction from Robinson, “F–king keep that sh-t in bounds, bro,” Robinson said after running down the pass and colliding with a spectator. (See GIF below) In an earlier training camp practice, Bortles threw 5-interceptions, and that is completely unacceptable. After picking up Bortles 5th year option, are the Jags all-in?

I sure hope they are not!!! After a poor showing in this preseason, head coach Doug Marrone declares, “It’s just a matter of the production,” Marrone said. “It’s not the production we want, OK. I’m not saying that Chad has it or not. It’s right up there for grabs, and either person can take it. But it’s up there, and we’ll take a look at it, and at the end of the day, we’ll make the best decision. Again, who is the best person? “It’s very simple. Who is the best person to put in that position to lead the offense?” Heading into their week three preseason match up vs. the Carolina Panthers Chad Henne is slated to start over Bortles. The only problem is, what about ALLEN???

Who is Allen you ask? Brandon Allen the 6th round pick in last year’s draft should be considered in this QB competition. Allen stands 6’1 220, he is athletic, has a live arm, and accurate on the move. Allen played last week vs. the Buccaneers; the clipboard holder finished 10/15 144 yards with 27 more on the ground & 1 touchdown.  He displayed his arm strength, accuracy, and pocket presence; he deserves more reps with the starters. How can you declare a positional battle open without considering all players at the position? Chad Henne is that dish your mother cooked that is just EH, nothing special and you certainly do not ask for seconds. He is predictable, and you are aware of what you’ll be receiving. Allen is that new recipe that you haven’t had a full meal of, COOK THE MEAL MOM!!!! SN: I’d never yell at my mom by the way!! Do you catch my drift right guys? The Jaguars have nothing to lose by giving the young Arkansas Razorback Alum quality starting reps! It doesn’t matter if his reps occur in practice or preseason; they need to see what they have in the young signal caller. The writing is on the wall for Bortles; it says TIMES UP!!