And the TOP WR Trio is… 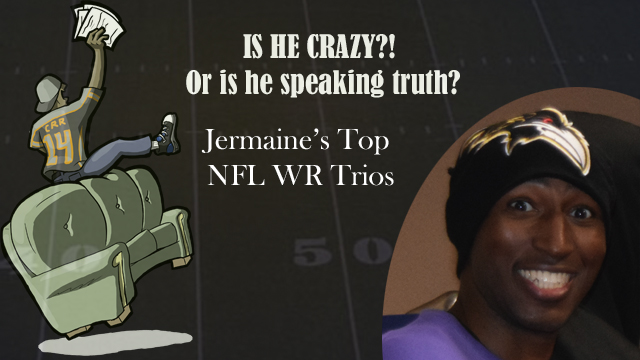 And the TOP WR Trio is…

Today, I asked a simple question on Facebook. It wasn’t complicated. I simply asked, “who has the best Wide Receiver Trio in the NFL?” I received several responses, but the clear winner according to social media is the New York Giants; this is simply because of the addition of Brandon Marshall to an already excellent receiving corps. I believe this to be a little bit biased.

Does the QB matter?

I was on the Marshall bandwagon before I saw his motivation tank towards the end of the season. And now he’s on a team with the quarterback who averages 17 interceptions per season? The main topic of discussion in the social media feed was, does the quarterback matter when it comes to discussing who has the top receiver trio in the league?

The gentleman discussing the matter decided that it did not matter due to the wording of the question. Now if that is the case, then you have to bring in the Jacksonville Jaguars into the discussion; I say this because Blake Bortles is considered to be trash by many pundits, due to a very frustrating 2016 season. However, the former first-round pick has three deadly weapons to throw to in Allen Hurns, Allen Robinson, and Marquise Lee. I am sure this is leaving you scratching your head wondering, “Lee, seriously?” Yes, Seriously, he is a factor. Let’s take a look at the stats.

The former USC player may have only had 3 TDS on the year, but he helped move the chains for the Jags 44 times (Brandon Marshall 43 first downs). His 63 recs for 851 yds (Brandon Marshall 59-788-3 TDs) is truly something to looking at from a third-string Wideout. Sure during the season he eventually supplanted Hurns for his job but imagine an entire season with Blake Bortles actually in his 2015 form? Anyway, this is not about one guy; this is about complete WR units, or at least the top three.

Let’s move over to another unit that I consider to be a WR factory. One could state the Pittsburgh Steelers come to mind when thinking TOP WR units. While 2016 was not a shining example of that, with Mr. Brown clearly “steeling” the show in 2016 with 106-1284-13 TDs. But with Martavis Bryant returning from suspension and the up and coming Eli Rodgers (who I believe will replace Brown eventually), this squad is going to unfortunately be monster in 2017 (Me, Ravens Fan).

I could go in on a couple of other squads such as the Cowboys, Packers (Keep in mind this is not considering the QB), or even Bucs, but I am going to give you what you came here for; you came for the list. Here are my Top-5 WR Trios of 2017: