Are your favorite Fantasy TEs already off the board? Here’s a gift for you.

Are your favorite Fantasy TEs already off the board? Here’s a gift for you.

There are still exciting Fantasy TEs in this game even if they’re not body-slamming their friends off the field. There are different tiers of TEs, and while the Kelce/Kittle tier is extremely exciting, and they are likely to be the next beasts in the game, let me focus on a sleeper. This former Sooner should be considered in fantasy as well as the game in general. That sleeper is Mark Andrews.

All that glitter ain’t gold…

“Sure, Jermaine you’re such a homer!” First of all, watch your mouth! Second of all, hear me out. There are Fantasy TEs like Zach Ertz and Evan Engram who currently look very appealing when it comes to the position. Engram because the G-Men are going through a “Murphy’s Law” type of season, where everything can go wrong will. And Ertz because he put up over 1000-yards and 8-TDs last season. Anyone getting 156 looks a season will most certainly raise eyebrows considering future production. BUTTTTTT!!!!!! Yes, a big “but.” DeSean Jackson is about to eat into Engram’s workload in the 2019 season being that he is back in Philly. Not to mention “BDN” Nick Foles has taken his services to Jacksonville, so we have no idea who is going to be the main target in Philly under Carson Wentz again.

Now, back to the lecture at hand…

Let me get back to Andrews. We saw last season when Lamar Jackson was truly on his game, it was either Willie Snead he was targeting or Mark Andrews. Mark had 34-receptions with over 552-yards and 3-TDs. Before week 9, the rookie TE was averaging 27 yards a game. But when Lamar took over, he managed to get an uptick of 44-yards per game. While these numbers are not Kittle type numbers, in the fantasy world, adding a TD every other game with an uptick in receptions to those numbers could mean the difference between being in the playoffs or looking from the outside in. Even the Athletic’s top Ravens writer Jeff Zrebiec had this to say about the 6-4 254-pounder.

“With the Ravens not having a whole lot at receiver, Andrews could realistically see 70-plus targets after getting 50 in 2018.”

From my perspective of watching football, the QBs not named Tom Brady, who tend to struggle early in their careers in the passing game tend to lean heavily on their TEs as more of their security blanket. Take Cam Newton for instance. We know Cam’s arm motion is not natural and even Kelvin Benjamin (as bitter as he was about life) spoke some truth about the Panthers’ signal-caller and his arm talent.

Former #Panthers WR Kelvin Benjamin not holding back on organization, Cam, when talking to the @TheAthletic https://t.co/pa2sMo0VXm pic.twitter.com/7TcUP5zpsO

This inaccuracy is why he threw to big targets like Benjamin and Greg Olsen. Another example of a great TE with a terrible signal-caller is Todd Heap and Kyle Boller. Heap set TE receiving records (5496-yds and 41-TDs) in Baltimore, and he did it with not one but two mediocre QBs in Kyle and Joe Flacco.

It’s not just Baltimore with this problem, look at Bernie Kosar outside of his 1988 season. Tony Romo rode Jason Witten his entire career. I’m sure Cowboy Nation just got all tight about me saying that but oh well. TEs help up and coming QBs or even the ones that can’t seem to make the leap to (and I hate to say this word) elite status.

When you’re looking at your fantasy draft boards in the upcoming weeks and see the flashy Fantasy TEs pop off the board, have confidence that there is a sleeper who will produce big in the 2019 season and recognize that I’ve already said: “you’re welcome.” 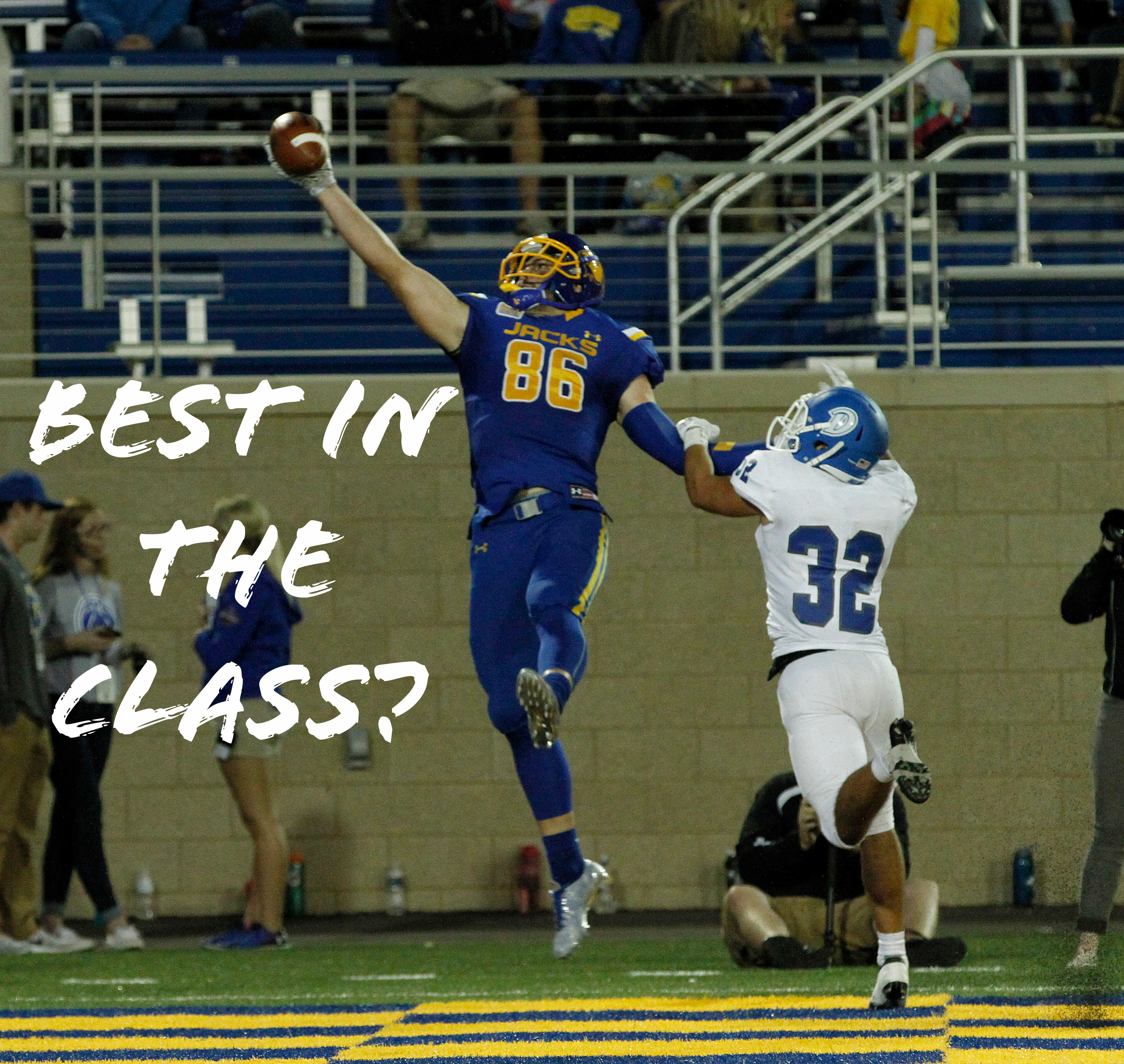 College Football is the clear and only pipeline to the NFL. It is filled with thousands of talented young men that dream of playing at the next level. Only 1.5% of those players become pro football players. Every draft has positions that are deeper than others, some believe this is a quarterback class and others believe it is a running back class. The tight ends have something to say and I am all ears!!! Here is my scouting report!!

The Good: The Jackrabbit tight end brings a physical presence to the run game. He finishes blocks in the fashion of a road grading offensive lineman. He does a good job washing down his defender to open running lanes. Goedert is athletic for a man his size, he is a highly versatile weapon. Line him up in the slot, out wide, in bunch formations, and inline as a traditional tight end. He has strong soft hands when plucking the ball out of the air. He does a great job tracking the ball on down field routes. He possesses a solid route tree and knowledge of spacing in zone coverage. He offers a skilled big body target in red zone situation. Dallas catch radius can prove to be huge at the next level. The quarterback isn’t required deliver the most accurate passes, instead they need to get into his area code. Hauling in 92 & 77 receptions in 16/17 shows his ability to carry a passing attack as the main option.

The Bad: Like most of these college tight ends, dallas did not face much man coverage. He did not have the luxury of playing with a capable quarterback. His quarterbacks struggled with accuracy, timing, and pocket presence. The quality of competition can be a problem for some scouts and teams. He looks more athletic than most of his opponents.

Considering his scheme versatility like (Kelce) he is a match up nightmare. He can do similar things to Kelce, running jet sweeps, shovel passes, tight end/receiver screens, and dominating the middle of the field. He is the most complete tight end in this draft, with his ability to catch and block. Dallas has star potential and could be the first tight end drafted in April.