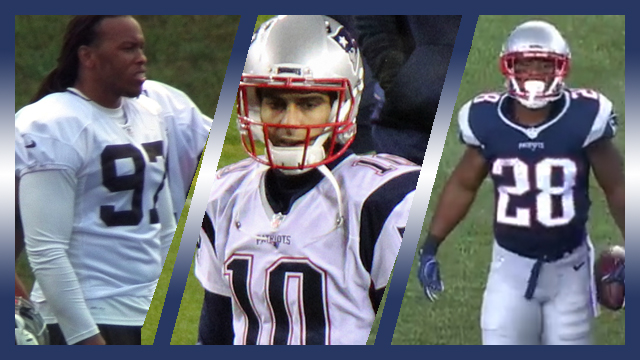 Preseason football for Pats Nation has arrived. Game one had it’s ups and downs but we made it right? Here are four notable takeaways from game one against the New Orleans Saints.

The 4th round pick out of the University of Georgia was on pace to have a great game. He displayed strength, great hands, and strong at the point of attack. He did a terrific job catching the football away from his body. He finished the game with 4-catches and 55-yards in the second quarter, might I add. The offense did not gain traction until Mitchell touched the field. He gained the type of separation the starting receivers were not producing.

The Georgia Native’s rookie debut was halted suddenly after suffering what looked to be a gruesome arm injury, but it was a dislocated elbow sidelining him around 4-weeks. The former Bulldog adds athleticism, strong hands, and a better catch radius than the “Julian Edelman” and “Danny Amendola“s of the world.  If he can come back after his injury and continue his fast start, the offense will have another piece the puzzle.

This young player was on my radar for some time now. He has battled injuries going back two years ago in his rookie year. Only the real Pats fans would have been pulling for him to succeed. The former Stanford Cardinal had not played a snap in the NFL before last night. It was his NFL debut, and he had a good showing in his first taste of NFL gameplay. The former Carolina Panther. showed good vision, decisiveness, and an excellent burst. He displayed that burst on his 44-yard touchdown. He finished the game with 9-carries for 64-yards and a TD. He also did a pretty good job in pass protection last night as well. If he can continue to build on this performance going forward, he can certainly carve out a role in this offense similar to Dion Lewis from last year’s preseason.

After trading Chandler Jones and the injury to Rob Ninkovich, most pundits wondered how the Patriots would generate a pass rush. Last night the pass rush came from several different players and positions on the defensive front. The defense finished with 2-sacks, 4-QB hits, a hand full of hurries, and a forced fumble/touchdown. Early in the game Jabaal Sheard, Chris Long, and Shea McClellin provided good consistent pressure off the edge. Sheard was nearly unstoppable; he generated pressure in one on one situations and against double teams.

You can certainly ask Mark Ingram about Sheard after the Hollywood Native used one hand to strip Ingram for a fumble that was recovered by New England. He is the key piece for this defensive front, and I expect a big year from him. Long placed notable pressure as well, he was in a 2-point stance on the edge and displayed good leverage with his length. His bull rush was effective and consistent. The star on the defensive front was 2nd-year player Trey Flowers.

The former Arkansas Razorback finished the game with 6-tackles, 2-QB hits, a forced fumble/recovered, and a defensive score. He generated pressure from all over the line. Lining up at DE and DT, he was impressive rushing the QB from all area codes last night. If the defensive front can keep up this type of performance, the absence of Tom should be a little easier of a task to handle.

Jimmy Grappolo had one of the most anticipated starts to preseason that I have ever seen. There was an abundance of pressure for the 3rd year QB to play early and well.  The young QB started the game 3-7 for 33-yards displaying bad footwork, decisions, and ball placement. The signs were not looking good for him especially when the offensive line gave up pressure on his first two drives. If the Head Coach were an ordinary guy and not Bill Belichick Jimmy would have been pulled early on, but he was allowed to continue. Jimmy and the offensive line showed resilience and rebounded together as a group.

The former Eastern Illinois quarterback finished his next 8-passes, going 6-8 for 113-yards. He was awarded time in the pocket and established a rhythm, making throw after throw. He even evaded defenders and ran for a critical 4th down conversion. That type of resilience and mental toughness is key even in the preseason. He struggled without about six other offensive starters. However, the silver lining is he rebounded without them as well. If he can continue to grow in this preseason, the Patriots should be in good hands with the young QB!!