Who is Rashad Ross? This is the question the Baltimore Ravens have to be scratching their head about, as this particular Washington Redskin torched Ravens’ cornerbacks Asa Jackson and Tray Walker for most of the second half as he racked up 6 catches for 56-yards and 2-touchdowns in the 31-13 meaningless preseason beatdown win over the Ravens.

With Pierre Garcon and DeSean Jackson both on the sideline, Ross, Ryan Grant and Jamison Crowder all put in work on the Ravens’ secondary, as the trio totaled 16 catches 169 yards and three touchdowns. So the question is “are the Ravens just that trashy in the secondary or are the Redskins’ backups just that good?

I could fall back on my “Dean Pees is trash” diss, which would be true and all too easy, but lets take a deeper look into this secondary to define the issue.

In my opinion, when press coverage is played, the corner is supposed to place hands on the receiver at the snap and make it a huge problem for them to get off the line of scrimmage. The whole point is to impede receivers and make their life extremely difficult, usher them to the sideline, leave a few bruises and something to thing about the next time they see your number; however this could not be further from reality for the Ravens. Seriously, any WR that lines up against you should be thinking “oh crap it’s this guy again”, not “yes, easy money”.

They might as well have attached hinges to the Ravens’ corners due to them opening their swing-gate hips on the line of scrimmage and giving the skins’ receiving corps everything they wanted on the inside.

As a fan, frustration builds when you constantly see a once aggressive “in your face” defense look dismal because of small changes in the tenacity of the corners. I am not saying this is the whole issue but lack of aggressiveness is part of the problem.

For those true BSHU fans out there, you are familiar with the name Chris McAlister; arguably the most physical corner to ever dawn the purple and black. While Chris and John Harbaugh did not see eye to eye, (which is what led to his release in the 2009 offseason) he, under former Ravens’ head coach Brian Billick was considered one of the top 3 CBs in the league in 2004. According to the Baltimore Sun Billick even went as far as saying

“We believe Chris McAlister is the best cornerback in the National Football League; we concede that,”

This was mostly because of his ability to jam and then shadow the receivers. 26 career interceptions are proof that you need to be a little more physical in order to get the job done and Chris did just that.

What I am getting at is M-Cal’s level of nastiness needs to be reinserted into this secondary. Sure we have Jimmy Smith to help with that. He’s been beating guys up since he was a Colorado Buffalo but that only covers one side of the field, who is going to step up and stop being “Mr. Nice CB”? Lets hope Rashaan Melvin and Tray Walker “bring the nasty” as Spurs head coach Greg Popovich says. Baltimore’s secondary needs all the nasty they can get.

Maybe they can use a little mentoring from Steve Smith Sr. I don’t think it gets any nastier than that guy, especially after seeing him rumble and get ejected tonight. 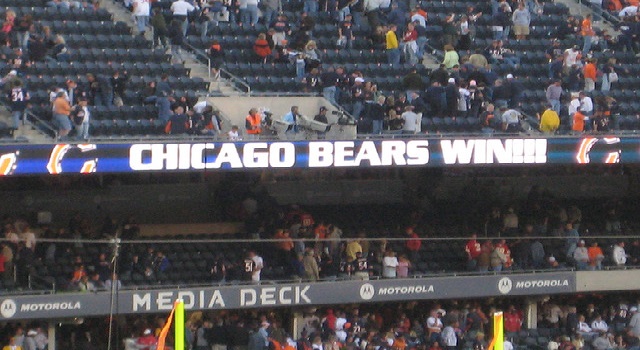 The Chicago Bears have done it again. Last night Chicago went on the road to face the New York Jets and took home a second consecutive road victory. The Bears capitalized on New York’s mistakes to take an early lead and despite a rash of injuries, held on to secure the win, with the Jest driving in the final minutes. It wasn’t perfect and wasn’t pretty, but a win is a win. Here is the good and bad we saw last night.
Respect the D: It’s early but the Bears look to have a respectable defense again. The unit was hit hard by injuries leading in to and during the game but picked up right where they left off last week. On the second play of the game, Ryan Mundy set the tone when he picked off a Geno Smith pass and ran it back for six and an early lead the Bears would not relinquish. Kyle Fuller made his first start in place of Charles Tillman and looked a lot like “Peanut” while he did it. Fuller showed why he is a rising star by being around the ball all night finishing with 7-tackles, 2 forced fumbles, and a crucial interception in the end zone. This performance was aided by excellent line play across the board. Lamarr Houston, Jared Allen, and Willie Young, who got yet another sack this week, got to Smith early and often drawing attention away from Stephen Paea, who recorded his first sack this year, and the 2 rookies inside: Will Sutton and Ego Ferguson. The young duo, working to replace Jeremiah Ratliff, was impressive in their first extensive showing. By games end, Sutton had 3 solo stops and Ferguson had 2-tackles and a sack. Also in relief was Jon Bostic who filled in at Outside Linebacker, after Shea McClellin broke his hand during practice. The second-year-pro didn’t have a flawless game by any means, as he was caught out of position more than once. However, Bostic showed great mobility and alertness by deflecting 2-passes and leading the team with 13-tackles. Despite these standout performances and overall strong play the Jets still racked up 300-yards passing with another 114 on the ground. However, the Bears’ defense resilient, forcing them to settle for 4 field goals and only 1-touchdown as they went 1 for 6 in the red zone. Yards do not win games but points do, and the defense excelled in their role there by hanging tough when it mattered most, including a 4th and goal in the closing minutes.

Gritty O: The Bears’ offense wasn’t bad, but they weren’t great either. The running game stumbled in its second week without Matt Slauson or Roberto Garza and Matt Forte only gained 33-yards on 13-carries against the merciless front-7 of the Jets. The passing attack had a little more success but was not without problems of its own. Brandon Marshall tweaked his previously injured ankle and, though he returned in the second half, was obviously handicapped in his speed and maneuverability for the duration. While Marshall struggled with a single catch for only 6-yards, Alshon Jeffery flourished by making 8 grabs for 105-yards and 2-carries for 13. Martellus Bennett took advantage of Jeffery’s success, and the extra attention it gave him, to make 5-catches for 54-yards and 2 touchdowns. If the Bears won it also means Jay Cutler did well overall, especially considering he was sacked 3-times and had numerous passes tipped or disrupted by a hit. Rex Ryan threw every blitz he could probably conceive of, yet Cutler stayed composed, tough, and elusive. The Quarterback shook off hits, escaped sack attempts, and made good decisions with the football. He had accuracy problems and lost a fumble on one sack that should have gone for six the wrong way but overall a mature and gritty performance by the QB as well as the rest of the unit.

Special Forces: The specialty units have ranged from bad to terrible before this game but the group was somewhere between average and good in this one. Some new faces and a shuffling of duties led the unit to have its best game of 2014. Rookie Ahmad Dixon, aided by Senorise Perry, recovered a muffed punt early on and then proceeded to throttle the Jets’ returner immediately after he caught the next punt. Another rookie, Rashad Ross took over the kickoff return duties, previously held by Perry. Ross only averaged 21-yards per return but he showed his speed, vision, and quickness on each one and had a very promising debut overall. Finally, although no punts were blocked in this one, a few were too close for comfort. The group still has work to do but continuing this improvement is nothing but good news for the entire team.

The Bears played tough against a tough opponent for a hard fought victory. The bad part about a hard fought game like this is that neither team leaves unscathed. Aside from Marshall, the Bears had their fair share of injuries on Monday which may come back to haunt them. The Chicago Safety position was decimated as Mundy, Chris Conte, and Danny McCray all finished the game on the sideline leaving only 4th round pick Brock Vereen and Dixon to finish out the 4th quarter. The Chicago trainers will be working overtime in this short week but, if any of these require more than a few days, the Bears may have to go looking to the rookies because these kids can play. We’ll find out if this youth movement continues on Sunday when the Bears take on their arch rival the Green Bay Packers and renew the NFL’s oldest rivalry.