Underrated Needs for the Philadelphia Eagles

Underrated Needs for the Philadelphia Eagles

It has been a magical season in Philadelphia. From underdogs to Top Dogs, the Eagles have finally gotten the Superbowl victory they have desperately fought for. After two weeks of partying and pandemonium in the streets, topped off with a grand parade and a speech for the ages, it’s time to get back to business. With free agency looming and the draft not far behind, the Eagles will be getting to work on building a roster to repeat as Superbowl Champs. The Eagles are one of the deepest teams in the league, but I’ve come up with some issues that need to be addressed. Here are the underrated needs for the Philadelphia Eagles. First up – Linebacker

The common train of thought among Eagles fans is “We need a LB, Jordan Hicks can’t stay healthy”….I’m gonna go out on a limb and say that is a myth. The Eagles play in Nickel coverage ( 2 LB 5 DB) about 90% of the time. So that is 2 Linebackers on the field at a time. Safety Malcolm Jenkins played Linebacker 42% of the time. I don’t see this trend going away.  Nigel Bradham and Jordan Hicks are both 3 down LBs so they take almost all the snaps. Even with Hicks injured, Mychal Kendricks came in and played well. By my count, that’s three LBs for a team that plays two at a time. I say they are set at the position. Nigel Bradham signs somewhere else? That changes things. Is depth needed? Sure. But this is not the major need in my opinion. The REAL need is……..

I know, I know…..Malcolm Jenkins, Rodney McCleod….one of the better Safety tandems in the league. But who is behind them? As stated above Jenkins was at LB for a bulk of the defensive snaps. So who was back there defending the back half? That was Corey Graham. One thing I believe to be a fact: The Eagles don’t beat the Patriots without Corey Graham. His ability to cover enabled Malcolm Jenkins to roam as a chess piece and wreck havoc. Here’s the problem, the 33-year-old Safety is an unrestricted free agent. Behind that….another free agent and a special teams player. So basically the Eagles are two deep at a position that they would like to play 3. The team could bring Graham back or maybe even move one of their young corners to safety, either way, some youth is definitely needed at the position.

The Eagles had the best offensive line in football last season. The worry here is longevity. Some quality depth is needed to take over the job when the older players move on. Despite any rumors you may hear, Jason Peters will be back at LT. It will probably be his final season, so an heir apparent is needed. Hal Vaitai played admirably filling in for Peters, but he by no means should have the job handed to him. On the interior, depth is needed as well with Stephen Wisnewski over 30, backup Chance Warmack heading into the final year of his contract and an unreliable Isaac Seumalo. Not the most threatening need, but a young versatile linemen would help tremendously.

With Torrey Smith likely to be cut, a true deep threat is again a need. Mack Hollins is the front-runner to take Smith’s spot, but someone to challenge him would be ideal. Right now the only proven guys at the position are Nelson Agholar and Alshon Jeffery. Again depth is key.

Another case where the starters are tops in the league, but the backups could use an upgrade. DT Beau Allen is a free agent and the other 2 players are a late round draft pick and an undrafted free agent. The Eagles split the defensive line reps during the season and there was a little bit of a drop off when the second line came in. Defensive pressure is the key to success for this team so keeping the rushers fresh is imperative.

Howie Roseman swung a masterful trade to bring in Jay Ajayi from Miami. Ajayi will get the bulk of the carries next season, but beyond that is in question. Ajayi has well-documented health issues heading into his final contract year which may prevent the Eagles from signing him long term. Hard working Corey Clement provides good depth but in my opinion, he’s more of a rotation guy. Nobody knows what to expect from Wendell Smallwood who was a healthy scratch for much of the season and a severely undersized Donnell Pumphery.  The position lacks a dynamic player that score whenever he touches the ball. Adding that element can make a good offense elite. 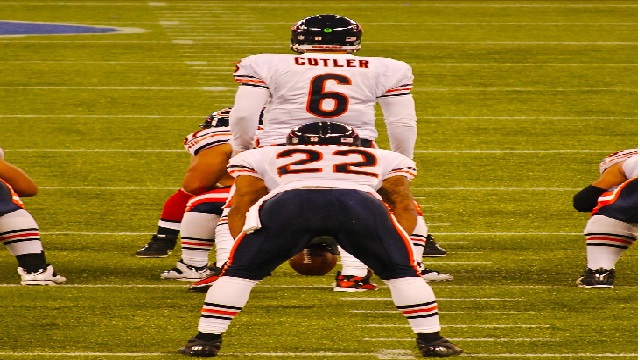 This week’s season opening game against the Buffalo Bills looked like a surefire Chicago Bears victory for exactly one series on either side of the ball. The game started off looking great. First, the new Bears defense took the field and held the Bills to a 3 and out. The Bears offense then took to the field and we saw a short run by Matt Forte, then 3 consecutive passes to Brandon Marshall, Alshon Jeffery, and Martellus Bennett for a quick score. After that it was pretty much all downhill. Why? Well, let’s take a look at the rest of this match-up and see what the heck happened out there.

Decisions, Decisions: A fumble by Marshall and 2 interceptions by Jay Cutler sealed the Bears fate in this one. To give credit where it’s due, the Bills have a very good defense that should likely be in the top 5 this year. However, while the fumble was a solid strip that we probably won’t see on Marshall again, the 2 interceptions both boil down to bad decisions by Cutler. The first one was a pass to Bennett, who wasn’t turned and had coverage up top with former Bear Corey Graham coming underneath. Whether it was bad route running or poor decision making is debatable but the second pick thrown was not. Rolling out to buy himself space and time Cutler threw the ball to the short middle into a sea of white shirts, where it became the 1st career interception of defensive tackle Kyle Williams. This again looked like Cutler forcing the ball where there’s no play to be made. Forcing the ball, in this game resulted in 10 of the Bills regulation points, with Marshall’s fumble accounting for another 3. Turnovers win games and, without those poor choices and mistakes, the game ends differently.

Defense: The new defense was hit and miss during this game. The Bears defense made a couple 3 and out stops, and Chris Conte even came away with a crucial pick that kept the Bears in the game. However, more often than not they were susceptible to big passes and unable to stop the run. CJ Spiller, Fred Jackson, Anthony Dixon, and EJ Manuel gashed the defense for 193 yards on the ground. Big free agency acquisitions, Jared Allen and Lamarr Houston, were almost non-existent accounting for only 1 tackle each. The only two people who really stood out  was Willie Young, who got the team’s sole sack and 2 of their 3 tackles for loss; as well as,  Conte’s interception. Buffalo does not have a great offense, and to say they are average may even be a bit generous. It can’t be certain whether it is growing pains from the transition to Mel Tucker’s scheme, unit cohesion, or just being out matched. Whatever it is, Chicago has one week to figure it out because the San Fransisco 49er’s will be a much tougher group to stop, and things won’t get any easier as the year rolls on.

Got Your Back: With the Bills defense focused on Jeffery, Marshall, Bennett, and Santonio Holmes in the passing attack, it left an opening for another head of the Chicago hydra, Matt Forte. Forte ran for 82 yards and caught another 87 in short passes and screens for 169 of Chicago’s 427 total yards. He has 18 games with over 150 yards from scrimmage, second to Walter Payton in Bears history and Sunday was his 7th highest total in his career. Forte truly was the one, consistent high spot for them this Sunday. Chicago’s offense is predicated on passing early and often, as evidenced by 49 passing attempts to 18 rush attempts. However, adaptability is the key too success when it comes to ensuring the Chicago Bears offense can receive those passes.  And if it is not getting done by the quarter back,  then he should have the ability  to change it up. A balanced attack of run and passes are crucial to keeping a defense off guard and with a player like Forte it would not be wise to keep him sitting in your backfield.

Bottom Line: Matt Forte was very good; however, the entire Defense did not do very well through out the game.   If the Bears want to succeed and move a head then they need to have a bigger presence on the ground. Even though Cutler threw 341 yards, they stalled out on the drives when they favored the pass too frequently.  The Bears defense needs to show up during the game. Allen and Houston were the big names that were expected to do well this season; however, they have not demonstrated talent yet.   The same can be said for most of the defense, safeties Conte and Ryan Mundy. Finally, Marc Trestman needs to sit Cutler down and get him back to where he was a year ago. Jay was making pretty sound decisions with the ball last season, taking what the defense gave and not forcing it.