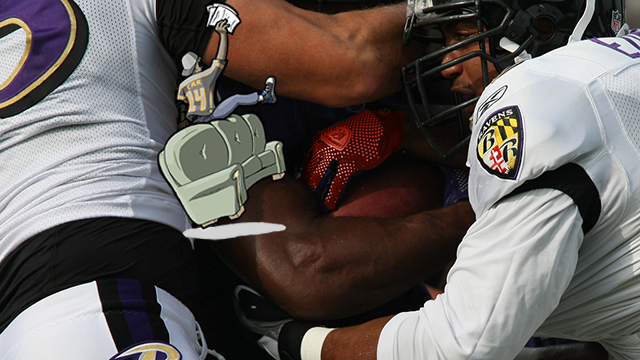 Thursday’s game against the Washington Redskins was one of absolute dominance for the Baltimore Ravens’ defense. I was particularly impressed with Brent Urban and Jaylen Hill. Dean Pees obviously implemented the feedback taken from RavenNation and maybe from Ozzie Newsome himself about the Ravens D of old. Seeing such a dominant D so early in the preseason is great news; however, could the Ravens D showing their hand too soon be a bad thing?

The amount of cloaked blitzing schemes brought me back to 2006 when Rex Ryan was terrorizing the league with the league’s number one defense. LBs were flying around everywhere. DEs were dropping back in Safety coverage; it was pure madness; no, it was “organized chaos”! I’m sure you felt a sense of pride to be a Ravens’ fan again, basking in the glory of the defense of old. Hold everything people! This is still preseason.

The past has presented similar situations in which the league quickly adapted. The “Wildcat” and read option offense are perfect examples of this. The read-option brought mobile QBs on the map again. Tim Tebow, Colin Kaepernick, Tyrod Taylor, and anyone else that knows Greg Roman knows about this particular scheme. The scheme rocked the 2011 NFL season but was thwarted by none other than the Baltimore Ravens in the Super Bowl. The defense learned that if you just smack the QB no matter who gets the ball, the OC has no choice but to get out of the formation.

They all catch on eventually

Tom Brady and Peyton Manning exposed the dominating blitzing schemes of the early 2000’s, which caused coordinators to return to being timid in their play calls. They managed to do this by using two different approaches. Peyton Manning was the ultimate chess player; his proactive approach of audibling his way out of the pressure blitzes by calling short quick slant route changes made it very difficult to apply major pressure. Tom Brady used more of a reactive approach to the game by utilizing the interior receivers and TEs, making them the primary look when going through progressions. Brady’s use of drags, short out routes to the RBs off the line of scrimmage, and skinny seams to the TEs haunted DCs across the league. The good news is one of them is retired, and the other has a shiny new deep threat in deep threat in Brandon Cooks he just can’t ignore. What I’m saying is there is nothing new under the sun, and it looks like the D in Charm City has gone full circle for the moment at least.

I will do the unthinkable and tip my hat to Dean Pees for now. My hope is that even though the Ravens showed their hand early, the OCs of the league veer away from any of the Denver Broncos, Indianapolis Colts and New England Patriots tape of old.

Bills set Tyrod up for failure?