As I’m scrolling through mock drafts, something interesting came up when I saw the Las Vegas Raiders at the 12th overall pick. Jordan Love was the selection. Knock if you’re with me. I’m kidding. I just felt the need to say that. Thank you, John Gruden, for the line. Anyway, back to the lecture at hand. Jordan Love? Bucky Brooks is the one responsible for planting the seed of hitting the reset button on your franchise signal-caller. I am in full disagreement, and here is why.

Reliability is a stat

Carr put up 4,054-yds last season. There are starting QBs in the league who did not even put up 2,500 yards on the year. Granted, guys like Matthew Stafford and Joe Flacco were injured during the year, but Joe has only thrown above 4,000-yds once in his 12-year career. Carr is a healthy, reliable signal-caller who can produce with sub-par receivers and under the most unlikely conditions. 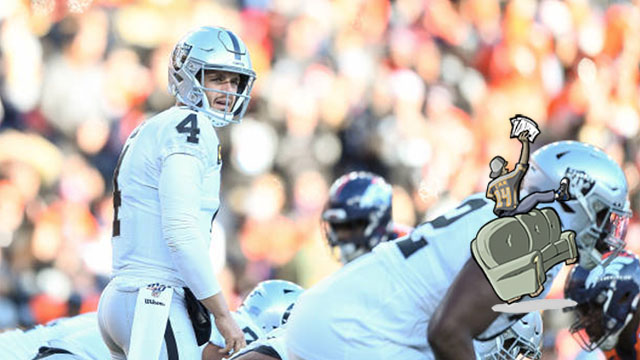 Sure, he only threw 21-TDs on the year but look what he had to work with. Additionally, it’s hard to put in that offensive work, if your defense is so outmatched, that you can’t get the offense on the field. The Raiders gave up 21.5 first downs per game in 2019. You cannot sit there and draw up a draft board that has QB at the top of the shopping list when there are so many holes to be filled elsewhere on the team.

The team’s needs are at WR, OLB, and CB. WR Jerry Judy, DE/OLB K’Lavon Chaisson, and CB C.J. Henderson will all still be on the board at pick #12. Don’t blow the pick on Love.

Besides, when I look at the tape on Love, I see a few things. I see a shiny new toy for Las Vegas. It’s easy to break out the Pat Mahomes comparisons because he is just raw out there slanging the rock, like Eazy-E in Straight Outta Compton. However, I see many throws into double coverage. Sure, on a highlight reel, it looks great, but at the next level, under increased pressure, we’re looking at the next “throw-it-n-pray” Jameis Winston. Even Charlie Campbell from walterfootball.com lit him up on the comparison:

“Player Comparison: Blake Bortles. Love reminds me of Bortles in a few ways. Bortles and Love both have very good skill sets, but they also have problems with accuracy, turnovers, and seeing the field. Both of them can be inconsistent with stretches of good play and then times during which they struggle with their issues.”

Raider Nation, is that what you want your future to be? A guy who doesn’t go through his progressions and chunks it no matter what, when you have a reliable, durable option who just needs weapons?

Stick to the script

Don’t do it! Don’t go after the flashy 2020 Tesla when you have a reliable 2014 Buick in the garage already. The Buick can be fixed at the local shop with maintenance and a couple of upgraded features. What shape will Las Vegas be in if the Tesla breaks? You know a local Tesla mechanic because I don’t. John Gruden might start to feel a little heat should he push the team in that direction, and it not work out.