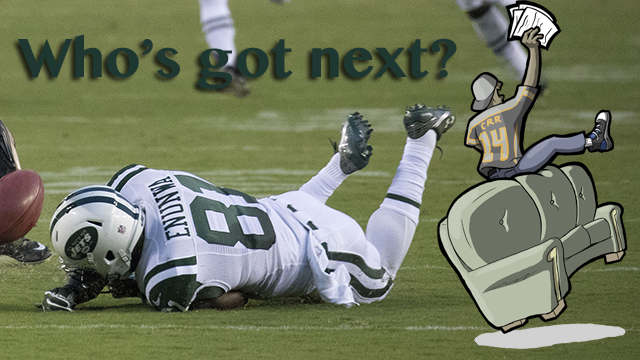 According to Zach Brunner from twitter, the Jets placed WR Quincy Enunwa on IR Monday with a neck injury he had this to say:

“There’s officially nobody to catch passes besides the RBs.”

Is he wrong? Let’s talk about who they are.

This guy is a shifty, elusive speedster who does not shy away from contact. Coming from the greatest college football factory, how did this guy not end up with the Baltimore Ravens? You know how Ozzie Newsome covets his former alumni players. The need was there. There is a video on YouTube called speed skills; definitely worth the watch. On just about every highlight, it shows Stewart either behind the competition or in open space. It appears that the young man is a gadget player used for primarily reverses screen passes or the deep nine route. He is going to have to step up and do more for the Jets if they plan on looking like anything this season.

When it comes to the physical build, at 6’2 209, this former Clemson player fits the part. However, height is only one intangible needed to play the position. Peake has 4.4 speed, but can he go over the middle to make the tough catches required to move the chains. Peake is most remembered from when he had his soul removed from his body in a (legal) bone jarring hit from D.J. Swearinger in 2016 against the Arizona Cardinals; he failed to hold onto the ball and had to exit the game after the hit.

Jalin Marshall I believe this former Buckeye to be more of a returner than a true WR but stick him in the slot and he can be as dangerous as Julian Edelman with the right QB. The real question is who is that going to be?

Is there really anything more here than blazing speed and circus catches? Anderson runs a 4.36-40. He played the 2016 season at 170lbs. The guy has good hands, but just like Peake, the second he comes across the middle, he will be destroyed. After a rookie campaign of 42-catches for 587-yds and only 2-TDs, I’m only sure of one thing; this guy needs a sandwich.

Is the Ghost of Al Davis running the Jets draft board? Here is another burner who has circus catches and high acceleration. However, this fourth round selection is the most promising. According to Newyorkjets.com both he and Stewart led their schools in catches in 2016.

The Jets’ conditioning and WR Coaches need to get these young men to the table and give them all big spoons. Quincy Enunwa was the only player at the position above 210LBS.

What we know is that outside the numbers, this is a very very dangerous squad. They can all high-point the ball, and they all can stretch the field. However, this team is clueless as to what to do on 3rd and 5.