Arguably the most popular drill at the NFL combine is the 40-yard dash. Players can make or lose millions of dollars with 4-to-5-seconds of work. It really is fascinating to watch someone change their opinion on a player by how fast he can run in a straight line. Not only can players raise or damage their draft stock based on a forty time, scouts and General Managers’ jobs and reputations are on the line as well.

The forty-yard dash has a mean habit of fooling you into believing a player is better than what he is. You may see a blazing 40 time, then look at the tape and see a player who doesn’t know what he’s doing out there.
My philosophy is always valuing actual game footage over drills.

I do believe the forty is a bit overrated. For offensive and defensive linemen, Quarterbacks and Kickers, the 40 is pretty much meaningless. I only see a true value in a 40 time with Wide receivers and defensive backs. Why? Because who else is running 40 yards down the field on a consistent basis in a real football game? With that said, I’m going to try and predict some forty times based on how fast these players look on film. Should be fun:

*Disclaimer* This is NOT a WR ranking, I’m listing these guys at random. Rankings come later. Stay Tuned…

4.47
Jeudy has good speed. He’s been reported as running as fast as a 4.37 before. Players always seem to run better in their own facilities than at the combine, so I’ll add some time. But more important than his 40, is his ridiculous stop and start burst and his route running ability. That’s what makes Jeudy special.

4.51
Lamb has good speed, and a 4.5 forty is by no means slow. I just don’t think Lamb is some 4.3 burner that’s going to run 9-routes all day. His game, to me, seems to be excellent routes great hands and great run- after-the-catch ability.

4.who the hell cares? We already know he’s fast!
Henry Ruggs running the 40 is probably the biggest waste of time there is. You watch 5 seconds of his game tape, and one thing is obvious. This kid can run. Everyone seems to have already decided he’s going to run a 4.2 something, but even if he doesn’t, it really doesn’t matter. Sometimes speed is just obvious.

4.52
Running a 4.5 at 6’3 220 is probably equivalent to a 4.3 at 190. Either way, Laviska Shenault is an excellent Height/Weight/Speed prospect. His lateral quickness and strength are probably more of an asset than his straight-line speed.

4.49
Aiyuk is an interesting case because his long speed looks closer to 4.5, but his explosiveness is phenomenal. He looks to go from 0 to 60 faster than anyone else on the field. That short-area explosiveness is what will set Aiyuk apart at the next level.

4.39
This kid is an athlete. I expect him to put up good numbers at the combine all around. When you watch Reagor play, you see speed and explosiveness in every movement, lateral as well as vertical. His 40 time should be one of the tops at the combine.

4.55
Excellent size and route-running ability is Jefferson’s game. He’s more quickness in and out of his breaks than straight-line deep speed, and it totally works for him.

4.34
Small, lightweight, and super fast. Speed is the name of Hamler’s game. He’s a true deep threat, and it’s apparent on tape. He’s another guy that really doesn’t need to run a 40 because we already know he’s fast.

4.56
Higgins is in the mold of the bigger contested-catch type of Wide Receiver. With those types, speed is a bonus because primarily those guys are using height and physicality to make their catches. However, Higgins does have a bit more juice than the prototype possession WR.

4.55
Similar player to Justin Jefferson in a sense that he wins with quickness in his route running more than with speed and explosiveness. Van Jefferson’s route running expertise was on full display at the senior bowl.

4.52
Mims is similar to Tee Higgins in that he’s predominantly going to win with size. But Mims is also a very gifted athlete because he has a level of fluidity and body control to go along with good speed for someone his size.

4.60
Speed is not his game. And it doesn’t need to be. Pittman is a bully ball receiver; he’s going to catch the ball whether his defender is there or not. Size and strength are where he wins.
This wide receiver class is insanely deep, so it’s impossible to do the entire class. But these are just my guesses on how some of the more popular players in the draft will run.

Since you’re already here, check out my latest Pre-combine Quarterbacks post as well below (Click the photo). 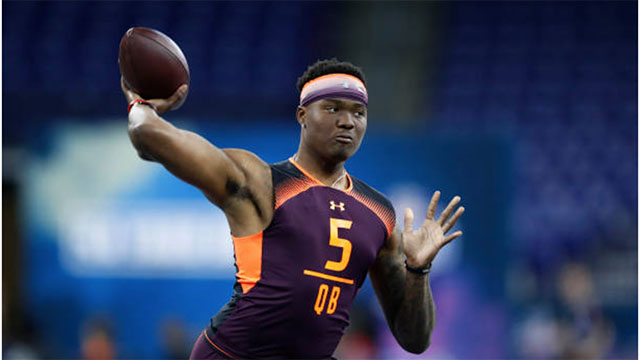 Should the Ravens Bring Back Bynes or Go Shopping?