Myles White looks to be the answer for Packers 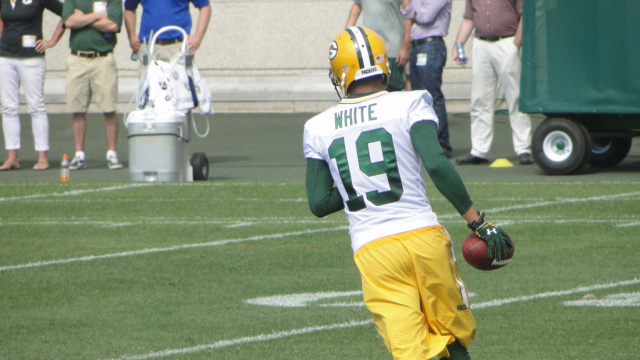 Jordy Nelson is done for the year. Randall Cobb just went down last night against the Eagles with a shoulder injury and now is questionable to play week one. Aaron Rodgers is not even sure who he is throwing to. But luckily for him he has now loyalty to one particular receiver. DaVante Adams is the number one guy for now but he will need some help. The time for Myles White is now.

Jeff Janis and Ty Montgomery are hardly household names and yet they are the only two obstacles in White’s way of starting for the Green Bay Packers at WR. With the way injuries are coming down for this corps, I would just say it’s only a matter of time before we see #19 at the top of the depth chart. He’s working diligently in that direction.

His highlight one-handed grab against Philadelphia Eagles’ CB E.J. Biggers was one to remember. Even the announcer Kevin Harlan had this to say during the play:

“White has been a star as a receiver tonight, making a huge stamp on that receiving…(Harlan stopped mid-sentence due to the official making a call)”

Harlan was not only impressed with White’s magnificent catch but his WR contributions to the Packers all night as he led all receivers on the evening with 9-catches for 89-yards.

For the LA Tech product, this game could be the difference of not only making the roster but also making some big plays with the ones. It appears the Packers have confidence in his gameplay even after a drop in the second quarter. Brett Hundley went right back to White two plays later on a 3rd and 5 on his own eight-yard-line and came up with a 15-yard catch for a first down. White dropped a two-point conversion attempt as well as missed a deep TD opportunity that may have been slightly overthrown but I still believe the QBs still believe in this 2nd year player.

White reminds me of a mix between Braylon Edwards and Brandon Cooks. When you look at Edwards you see all of the circus type catches but when it comes to fundamental route-running and basic catches you see some of the cracks in his game. With Cooks, you see home-run play-making ability the second the ball is in his hands because he can break ankles and move up the field in almost an effortless fashion.

Combine the 2 together, stick them in the microwave, add some green and yellow and sprinkle a little bit of immaturity on top and boom, there you have it folks, Kevin White.

There is a definite difference in the weight of White from college to now. I peeked in on an old tape of his and he was considerably underweight. Someone introduced this young man to a food truck and made him stay a while, as he is now 190lbs and looking like a healthy NFL WR.

Now that circus-catch receiver Myles White looks the build, can he continue to stack play on top of play and solidify himself above Janis and Montgomery as a starter? I believe so. Look for head coach Mike McCarthy to continue to “kick the tires” on this exciting young player.

Does Cleveland have a clear RB solution?