Is Lamar Jackson the Real Deal? 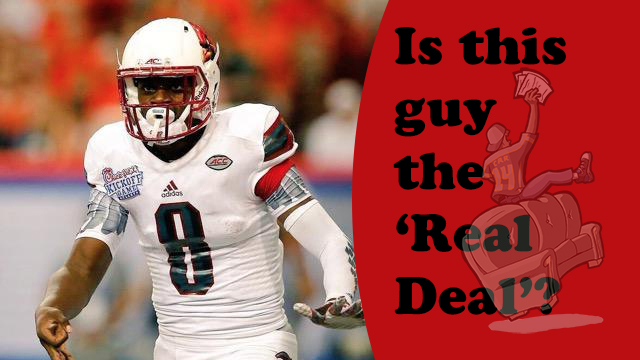 Is Lamar Jackson the Real Deal?

In the land of college football, there are contenders, pretenders, cupcakes, and the Real Deal!!! Every year there are those players that slide under the radar and completely destroy our preseason Heisman predictions. These players tend to hit a hot streak early in the season with dominating performances and jaw-dropping stats. Do all of those players keep their proverbial hot streak going? In their dreams, yes they do. In reality, not a chance. So asking if Lamar Jackson is the Real Deal, is not out of the question.

Last year Mr. Jackson showed in flashes, the potential dual-threat nightmare he has become. He threw and ran the ball in 2015, yet the overall problem was consistency. He improved his play as the season progressed. In 2015, the Louisville QB only threw for 1,880-yards with a 54.7% completion percentage and 12-touchdowns. He ran for 960-yards and 11-touchdowns, accounting for 23-touchdowns combined in 13 games!!! Let’s see how he has fared so far this season.

Only 4-games into the Cardinals’ 2016 season, Mr. Jackson has hit the ground running!!! He’s already amassed as many touchdowns this year than he did last season (25 total). With 1330-yards through the air already, the Cardinal QB is closing in on last year’s numbers. He is playing at an extremely high level right now!!!

Even with his stellar play, there is definite room for improvement. His completion percentage rose a small amount from last year’s 54.7 to 58.7%. These numbers are not great, especially if you’d like to be taken seriously as a passer. He has to continue to develop as a passer in the pocket. It starts with pocket presence, learning when to sit and deliver a strike or escape for a big run. He is a dual-threat and a dangerous one, teams with better defenses should attempt to contain him through a mush (soft rush) from the outside defenders and a QB spy. The 2015 Music City Bowl MVP will be tested by opposing defenses as the year progresses and the test begins TONIGHT!!!

The Florida native has turned into the leading Heisman candidate from as a Heisman dark horse before the season. Well after dominating sub par teams including Florida State, he is heading into a battle zone. The newly crowned Heisman leader is going to the home of the projected #1 ranked QB in the nation Deshaun Watson. Every Heisman hopeful faces a test during the year that has the potential to become their “Heisman Moment.” Walking into Clemson and knocking off the 2015 NCAA champion runner-up with a dominating performance will give him that moment. Jackson will be indirectly facing Mr. Watson and will be judged on how successful he plays tonight. The Louisville QB must play mistake free football and show he can beat them from the pocket consistently. The Tigers are +0.3 in turnovers while the Cardinals are -0.8 per game. Clemson will be looking to create as many turnovers as possible to keep their high-powered offense on the field. Jackson will have the eyes of the entire college football world on him tonight in Death Valley. Question remains, can he walk through the valley of the dead and leave with the WIN??? We will find out tonight!!

Dolphins’ DBs: You can recover