If I was Howie Roseman… 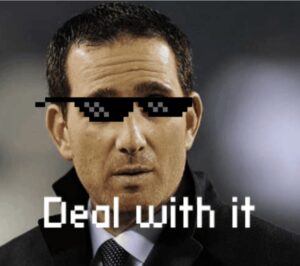 If I was Eagles GM and President Howie Roseman I’d be licking my chops right now as I think about all the talent available in this upcoming NFL draft. The Eagles have had a fairly busy offseason and aren’t done yet, most experts expect Howie to live up to his reputation as a wheeling and dealing wizard on draft night.

But since trades are quite unpredictable, I’m going make picks at normal draft positions. So if I was Howie Roseman I’d draft…

Round 2 #53 – Miles Sanders 5’11 211 RB. Eagles fans will say, “But we have Jordan Howard, Corey Clement etc. etc” Jordan Howard is on the last year of his contract and Head coach Doug Pederson likes backs that are a threat in the passing game. Miles Sanders fills that need and then some.

Round 4 #127 – Mecole Hardman 5’11 183 WR. The Eagles came into the offseason looking for speed at WR. They found it in DeSean Jackson, but Jackson is 32 years old so an heir apparent is necessary. Hardman has blazing speed and shows the potential to be a good route runner. But he needs time because he is relatively new to the WR position. While he develops, Hardman brings immediate help on special teams with his dangerous return ability.

Round 4 #138 – Sheldrick Redwine 6’0 196 S. The Eagles want Safties with a CB background, and Redwine fits that prototype. The Eagles use a 3 Safety formation for over 50% of their snaps, so depth at the position is a necessity. Redwine steps in and provides relief to the starters that are getting long in the tooth.

Round 5 #163 – Emeke Egbule 6’2 245 LB. The Eagles are likely to go into the season with Nigel Bradham as their MLB and a tandem of free agent signee LJ Fort and backup Kamu Grugier-Hill as their primary Linebacker rotation. That group is serviceable for the season, but all 3 players can be unrestricted free agents after the year so replacements will have to be brought in. Emeke Egbule is big and fast and played in a variety of roles with Houston. Most importantly he shows the ability to cover. He would be a great addition to help on special teams immediately and carve out a niche in the LB rotation going forward.

Round 6 #197 Nick Fitzgerald 6’5 226 QB. The Eagles owner Jeffrey Lurie says he would like to draft a QB every other year. It’s the organization’s philosophy to continuously bring in and develop QB’s. So since they didn’t draft one last year, they probably want to bring a guy in this year. Nick Fitzgerald is a physically gifted player with a strong arm and good mobility. He should serve well as a developmental project.

So this is what I would do if I was Howie Roseman. I believe with the players added you get immediate contributors on offense and defense as well as quality depth. I also believe the later round picks have upside while still helping on special teams early on. But that’s just me. Let’s see what the real Howie does…