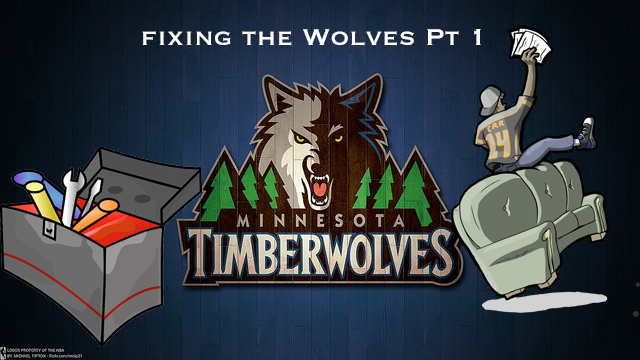 Almost every scout and basketball expert would agree that the Minnesota Timberwolves have one of the best young talent cores in the NBA.  Their “big 3” building blocks of Karl-Anthony Towns, Andrew Wiggins, and Zach LaVine are all under 22 years old.  Before I address the offseason needs of the Timberwolves, let me just reiterate how ridiculously good KAT is.

That being said, the T-Wolves also have the worst bench in the entire league. Look it up. They are dreadful when their starters have to rest.  The only bench player who performed at a marginal level was Shabazz Muhammad, but he’s a known chucker who also happens to be a free agent this summer.  The Timberwolves are in a great spot though because they have a talented young core, a proven head coach, and boat loads of cap space.

Clearly the offseason priority for the Wolves is to strengthen the bench as well as address the weak spots of the team: primarily 3-point shooting and DEFENSE.  But mostly defense.  It seems strange to say that a team coached by defensive mastermind Tom Thibodeau is terrible at defense but it’s true. Minnesota was downright awful on the defensive end, mainly because their 3 young stars seem genuinely disinterested in playing actual defense.  The two spots where the Wolves routinely get cooked are the 3 and 4 spots.

The first thing the Timberwolves need to do has nothing to do with free agency or the draft. The most obvious move that will fix a lot of the Wolves’ problems is a position/rotation move.

They need to move Andrew Wiggins to his natural position of shooting guard and stop trying to wedge him into the small forward spot.

Wiggins is NOT a 3. He doesn’t possess any of the characteristics or attributes you want in a small forward in today’s NBA.  He doesn’t rebound or play defense at all. He doesn’t create turnovers via steals or blocks at all. What he does is simply get buckets. When you directly compare his stats to similar players it spits out a list of very good shooting guards. http://basketballreference.com

That’s a great list of players, however limited some of them are. None of them have high numbers in assists, rebounds, steals, or blocks.  They just know how to put the ball in the basket. Plus, it’s unfair to make Wiggins guard the current crop of small forwards in the league like Kevin Durant, LeBron James, Kawhi Leonard, Giannis Antetokounmpo, etc. He isn’t big and strong enough to guard that type of player. He would be much better served guarding 2-guards and having more energy to expend on his prolific offensive skills.

Moving Wiggins to the 2-guard spot opens up a need for a “3 and D” wing player who can guard the other team’s best scorer and hit open 3’s on the offensive side of the ball. It also strengthens the bench by allowing the microwave Zach LaVine to come on as a 6th man role firing lasers from all over the court.  It suits his style much better.

There are two strategies that the Timberwolves can employ this offseason. I will detail both options and the pros/cons of each.

Best case scenario for Option 1 is to sign Serge Ibaka in free agency which would make them immediate threats for a Western Conference playoff spot.  Minnesota isn’t going to get Blake Griffin or Paul Millsap.  Ibaka is the perfect modern-day NBA power forward. He protects the rim on defense and provides excellent outside shooting, including corner 3’s on offense.  He can switch pick-n-rolls and guard multiple positions with his agility, length, and athleticism.  It would also enable Minnesota to move Gorgui Dieng to a reserve role instead of the starting lineup. Nobody who has ever seen Gorgui play says “I really like how that guy plays!” He’s a decent reserve player but he should not be one of your everyday starting forwards.  Just his constant pump fakes make my eyes bleed. Combining Ibaka with the #7 overall draft pick (Jonathan Isaac or Jayson Tatum anyone?) would make for a pretty solid core.

However, the Timberwolves would not have much salary cap space left to fill out the bench and would once again face the problem of having a bench full of guys that can’t put the ball in the basket.  Moving Dieng and the lottery pick to the bench would definitely help the bench situation but might not fix it outright.  The limiting factor in this option is that Serge Ibaka will likely cost $26-$30 million per year.  That’s a ton of money for any team.  It almost eats up all the Timberwolves salary cap space in just one player. Minnesota would have to use the rest of their space and a mid-level exception to sign a cheaper “3 and D” wing (guys like Tony Allen or Andre Roberson) to round out their starting 5.

That’s a surprisingly good 12-man roster! I’m dang proud of myself for coming up with this scenario.  I hope Thibs is reading this.

The Timberwolves would be immediately improved both defensively and with their bench. Can you imagine LaVine coming off the bench like Jamal Crawford or Manu Ginobili?  Scary. Plus adding Ibaka and a veteran wing stopper instantly upgrades the defense of the starting unit since Wiggins and KAT are so poor on that end.  This version of the Timberwolves would compete for the playoffs and scare a few teams, but wouldn’t compete for a championship in the next 3 years.  It all depends on what the goals are for this franchise in the short term.

Draft options for the Sixers

Should the Raptors blow the team up this...

This Is The Worst You’ll Ever See Ben...

Insights into the Most Polarizing 2017 NBA Draft...

CRR Podcast: Jordan is the greatest! Not Curry!