Five Reasons The Pittsburgh Steelers May Be Bound For Glory 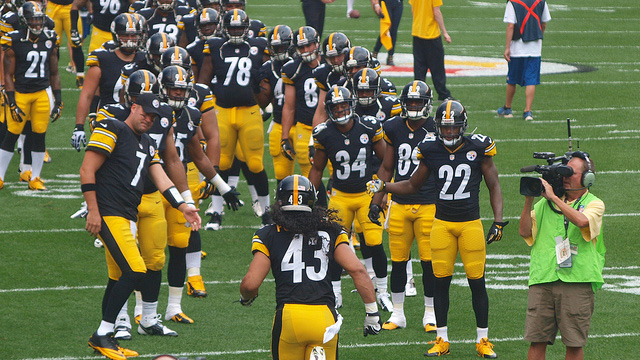 It is always sunny in Philadelphia; however in this case things are looking brighter in Pittsburgh Pennsylvania as the Pittsburgh Steelers look to be on a climb from another disappointing 8-8 season. A team that started out 0-4, which was the teams’ worst start since 1934, went on a 8-4 run that should give fans in Pittsburgh more hope than ever.

No. 2 Receiving Corps: The man receiving a majority of passes last year was none other than Antonio Brown. Brown nearly surpassed 1,500 yards and caught 8 touchdowns for the Steelers last season, en route to his second pro bowl. The 2010 sixth-round draft pick from Central Michigan filled big shoes with the absence of Mike Wallace in free agency.  Many wondered if Brown would be able to stretch the field; the answer to that question was yes. Brown did more than stretch the field with his 110 receptions and his 1928 all-purpose yards. Brown will also do more than stretch and abuse many secondaries this season along with the free-agent acquisitions of Lance Moore and Darius Heyward-Bey, whom look to add experience to the receiving corps, after losing the reliable and highly underated Jericho Cotchery and his 10 touchdowns this past season.

No. 3 Run priority: Problems for Pittsburgh start with the Running game. Not having a 1,000 yard rusher since Rashard Mendenhall and the absence of Le’veon Bell, the Steelers relied on Jonathan Dwyer and Felix Jones whom only combined for 97 attempts for a mediocre 381 yards. Bell would come back after injury and finish the season with 860 yards and 8 touchdowns. The Michigan State Running back will look to carry the load with newly acquired free-agent Laggarette Blount who averaged 5 yards a carry with the New England Patriots and took advantage of teams with a lack-luster rush Defense.

No. 4 Offensive line Situation: The most important aspect that will contribute to the Steelers success is the Offensive-line. In 2012, David Decastro missed the season with injury. In 2013 tragedy occurred when the now healthy Decastro fell on Pro-bowler, Maurkice Pouncey which resulted in a torn ACL for Pouncey. Decastro would continue to perform at a higher level and the Steelers’ Mike Adams would go to play Right Tackle, Left tackle, Right Guard and even Tight End. Having DeCastro, Pouncey and Adams combined with an already impressive Marcus Gilbert, on the field together will be a huge factor in the Steelers’ 2014 season.

No. 5 Defensive Struggles: Possibly the most prestigious part of the Pittsburgh Steelers, is the defense. Possibly one of the most underated players is Lawrence Timmons, who accumulated 126 tackles this past season. Despite not making the Pro-bowl, Timmons was a big contributor on Defense.  As far as the Secondary is concerned, there is a lot of criticism is swarming around Ike Taylor and Troy Polamalu. Taylor is a step down from what he once was. Taylor was a true shutdown corner, who guarded all opposing teams’ number one receiver and was a big part of the defense when it was ranked in the top 10. Polamalu’s recent surgeries were expected to slow him down last year; those injuries didn’t stop him from gathering 69 tackles and a few interceptions, en route to an impressive Pro-bowl season for the 33 year old veteran. Overall, the unit struggled to get turnovers and sacks. The bright side of the Defense is the combination of Jason Worilds and Cameron Heyward. Worilds had 8 sacks last season along with Heyward’s 5 sacks. If things fall in place for Jarvis Jones this season, we can expect him to assist in the Defensive pass-rush this season. Things are looking up for the Steelers’ Defense as well as the team.

If the Steelers can manage to win the Division or at least clinch a playoff berth, everyone should expect the six-time champions to be one of the most dangerous AFC teams.

Young talented sports writer looking to bring you good articles and arguments whether it is the NFL or NBA. Very excited

Detroit Lions: Reggie Bush will Have Expanded Role in 2014