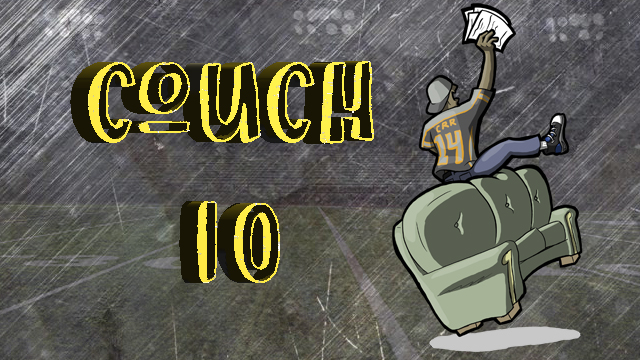 Do you ever get tired of sorting through the trash of power rankings to figure out who the top teams in the NFL are? Good, I feel some type of way as well about it. Today I am giving you a direct route to what you want; the Couch Rider Power Rankings. Here are the Couch TEN NFL Teams. Keep in mind, while you have fallen in love with their records and accomplishment from the past, their record is truly what they are, so stop whining when you see this.

#10 – New England Patriots – I’m sure every Pats fan true, or bandwagon is looking up my address right now for this one. Let’s be real. A rookie and a mediocre QB decimated your team in the season debut at home, and you played the Saints who’s defense is bottom feeder trash. Fans should be thanking me for putting these guys in the Couch TEN. Brady’s passing game is still beast, but they have to do more against better opponents in order to get back up the list.

#9 – Los Angeles Rams – There is no question that this team belongs in the Couch TEN. Jared Goff is looking like he is in midseason form and deserves recognition. Not to mention Todd Gurley II is looking like a top 5 back this year. Their D is suspect with the Niners putting up 39 against them Thursday night. I can’t wait to see what these new Rams look like a week from now.

#8 – Philadelphia Eagles – Carson Wentz is doing things I saw Andrew Luck accomplish in his first year this year. Their offense is one to keep DC’s up at night. Wentz is fifth in the league in passing and has managed to give the Chiefs a run for his money. Even their D is ranked just outside of the TOP 10.

#7 – Denver Broncos – This mile-high squad is very intriguing considering the offseason QB controversy. I don’t think that Paxton Lynch will see any work this season unless there are blowouts or injuries. Trevor Siemian has the job on lock and is convincingly taking control of games. They have a stellar Defense that only surrenders 52 yards per game on the ground. The AFC West is truly competitive but and there is no reason to believe the Broncos won’t be in the conversation of division lead come December.

#6 – Pittsburgh Steelers – This year’s Steelers were nearly shook up by a rookie in week 1. Antonio is better than ever but where is the rest of this team? Can they show consistent dominance and stop playing to their opponents level? Only time will tell. 9-sacks on the season is convincing, but that 1-interception is an eyesore.

#5 – Detroit Lions – This team looks dominant in all phases of the game. Any team with a nasty pass rush and a solid run game on top of an already highflying pass game is going to be extremely dangerous. Kenny Golladay is such a huge addition to this offense, and I believe the sky is the limit for Motor city.

#4 – Baltimore Ravens – Defense wins championships. This Raven D is looking like the 2006 Ravens who beasted on any and every opponent to take the field. Suggs has taken the field and somehow found the fountain of youth. These folks are nasty. The wins are not flashy on O, but they dominate so convincingly on D, that it is hard to overlook or undergrade. Joe Flacco still has a big question mark next to him considering talent and health.

#3 – Oakland Raiders – I’ve been yelling for many years that Carr will be the face of this league and apparently the Raiders front office believes the same after handing over such a nice check. This Raiders team looks like they will get a first-round bye with their dominance. However, they are in an extremely tough division.

#2 – Kansas City Chiefs – Alex Smith has a fire lit under him being tied for second in TDs in the league with 5-TDs . Did you know he has no interceptions on the year? Kareem Hunt is really on a roll and doesn’t look like he’s slowing down. Add those two factors to the fact this team is third in the league in sacks and you’re talking about a potential powerhouse. However, they need to cause more turnovers to get to the top of the mountain. One pick so far won’t get the job done.

#1 – Atlanta Falcons – Mohammed Sanu has a great deal to do with this ranking. He looks like a number one but of course not with Julio around. Sure this squad has the 20th overall defense, but all of that is made up for with Matty Ice and this prolific TOP-10 Offense that has more weapons than N. Korea.

I’m sure you’re going to go all “Facebook Gangsta” on me for this list, trying to defend your squad but I’m glad you came either way!