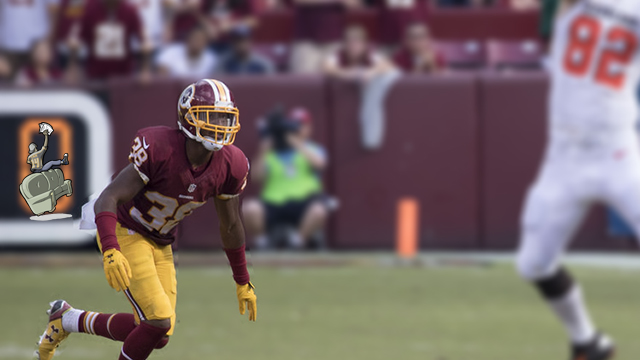 Thanks for coming back for more original sports perspective. Be sure to tell a friend. Our goal is to take you away from the world of drama and give you what you need, information on your team. Today that team is the Washington Redskins. A friendly source who wishes to remain anonymous tells me that the team is having quite the battle at CB and it has nothing to do with Josh Norman. Can Kendall Fuller unseat Bashaud Breeland before week one?

Let’s look at the intangibles. Fuller has the speed advantage. However, Breeland has more game-time experience going into his 4th season. Fuller was somewhat impressive with 36-solo stops and a few pass-defenses in his rookie year. The third-round pick already has the bloodline in the NFL. The knock to that is this isn’t horse racing, but the family trend has produced talented results in the past; there’s the Barbers, Mannings, Gronks, Longs, Cromarties, etc. who have proven that talent runs through the blood. The last statement is true or there is a great deal of networking behind the scenes; I’ll go with the ladder.

Critics have Fuller slated to start in the slot but I think with his height being the same as Breeland and outworking him daily in camp, he may as well be starting on the outside. I say out-working because no one in camp has been able to hold Terrelle Pryor except the Baltimore native (no not even Josh Norman). He’s not only locking the former QB turned WR down; he is giving the former Brown fits in practice.

Being in the coach’s back pocket doesn’t hurt either. Torrian Gray (DB’s Coach) according to redskins.com had this to say about coaching his former Virginia Tech player:

“Having Kendall has been awesome because if I want to get a point across with something, Kendall does it, he puts it on video, he knows exactly how I want it done, and he may take those guys, “Oh, that’s how it’s done.” That’s been the fun part of things. Kendall knows how I am, so whatever he’s telling those guys, I have no idea, but it’s been fun having a guy where if I want something done a certain way, he knows exactly what I’m talking about.”

If it looks like a duck and walks like a duck… Is this evidence the case with Fuller? He has the speed the football intelligence to wow the coaches and lead the players, and he’s leading by example on the field, taking on the best the team has to throw at him. All Washington needs to do now is give the second-year player a shot to put it all together in actual gameplay.