Making it to the top tier of football players in the world by simply making it to NFL is a feat that should be celebrated by friends family and shouted from rooftops all around of your hometown. I’m sure this celebration was the reaction to hearing Deonte Thompson has once again slid onto a 53 man roster. However, hearing that the Chicago Bears’ top receiver on Sunday had 26 total yards and was not a receiver at all has to have the team and the fans scratching their head wondering. What’s up with Deonte?

The Belle Glade Native had only 9 yards receiving against the Pittsburgh Steelers’ secondary. The question is “are the Steelers just that good, or are the Bears’ WRs just that terrible?” Of course, we have limited information to go off of, but I would like to compare for a minute. Thompson went 4-57-1TD in week two against the Tampa Bay Bucs who are currently ranked 31st in passing defense. Does that stat line hold weight now that we look at the Bucs passing D? I highly doubt it. The Steelers have the second-ranked pass defense in the league and have allowed only two trips to the end zone via air. That stat would explain why Thompson had such a lousy day. 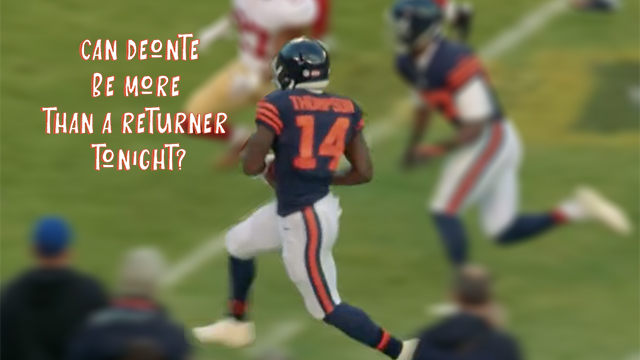 Can Deonte step up as a WR vs GB

Tonight, Thompson faces a secondary that is ranked 7th in the league in passing yards allowed and TDs allowed with three. There is some good news in the midst of this challenge. The Packers have 0 interceptions to show for their efforts. Mr. Thompson we all know what you can do in the return game and that is a legitimate threat. However, you need to turn up tonight against the pack.

I expect the Bears to stay true to their current running identity; however, they need to establish their passing game if they are ever to be truly respected as a threat in the NFC North. Deonte, it’s time to step up. Go Bears!