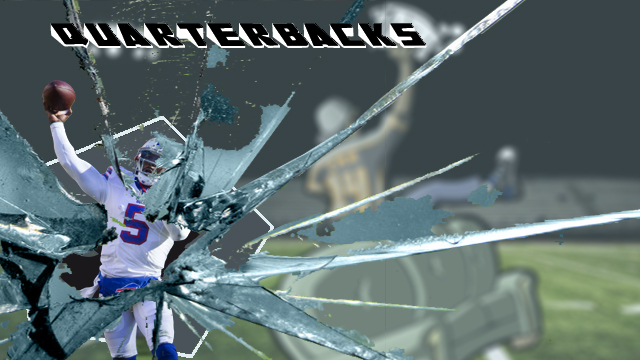 I know how everyone loves to talk RBs in Fantasy Football, so we will save them for last because we are aware they come off of the board pretty fast. Everyone needs a bell-cow or two to make their season a success. However, when choosing a signal caller if you haven’t chosen the golden boy Tom Brady, A-A-RON Rodgers or Matty Ice Ryan, where do you go. I got you covered with the 5 Breakout QBs in this article.

It really is. The Houston Texans drafted Deshaun Watson for a reason; that reason is winning. Sure one can say he had an explosive receiver who helped him along the way but the guy has pure football intelligence and will fit well in Bill O’Brien’s system no matter how complex it is. I have heard enough about the “Tom Savage is real” conspiracy. Deshaun cannot wait to get the rock to beastly WR DeAndre Hopkins who is looking for a star to help him bounce back in 2017. Look for Watson’s big play ability to Sam Bradford like numbers for Houston this year. I am talking 20+ TDs for the young buck. I predict this, but he has to win the job first.

You’ve said it. I’ve said it, HECK, his own family has surely said it. Sam Bradford is the leagues most overvalued player. Well, last year he showed the league that if you invest largely and have patience, he will produce. This injury prone Ram, I mean Eagle, no dang it, he’s a Viking, threw for 3877-yds, 20-TDs, and only 5-Ints during his 2016 campaign. The team is looking at Teddy B in the rear view because they feel confident in this starter. Shouldn’t you for your Fantasy team?

3. Only 6-picks on the season, two seasons straight? Quit hating!

So this guy is not going to lose you many points, that is for sure. Anyone who knows me knows I have a man-crush on Tyrod Taylor, but there is a legitimate reason. The guy is a dual threat. What he can’t get done to you in the air, he will do to you on the ground without a doubt. Points are points, and I’ll take them any way I can get him. Tyrod scored 94 of his 313 total FPS on the ground. It takes 25-yds in most leagues to even gain one point, and T-Mobile can get you 1 point on the ground with a simple 10-yard run that sure people gameplan for but they cannot stop. Get him before everyone else figures it out or reads this post.

There is no quieter QB in football than Marcus Mariota; this does nothing for the stat chart, but his gameplay does. Marcus may have only had one 300-yd game in 2016, but he is 26/9 TD/INT ratio makes up for that. He now has a beast in Corey Davis to complement an excellent stable of RBs. There’s really nothing more to say here. He lets his game do the talking and you will as well if you pick up this potential breakout player.

His organization undervalues this him, and he will make them pay dearly in 2018. The reason I say Kirk Cousins is undervalued is that only one QB in football had more +300-yd games (7) than this Redskin. When you average 23.7 points a game and get a beast receiver in Terrell Pryor come over from the Browns to boost a team that already has Jamison Crowder who had 7-TDs last year, you have to see this guy floating around the top of charts in scoring in 2017. He is about the seventh QB going off of boards in most leagues according to Fantasy Pros. So when the big names have left the board, don’t sleep on this one.