Are Coates’ hopes for #2 spot gone? 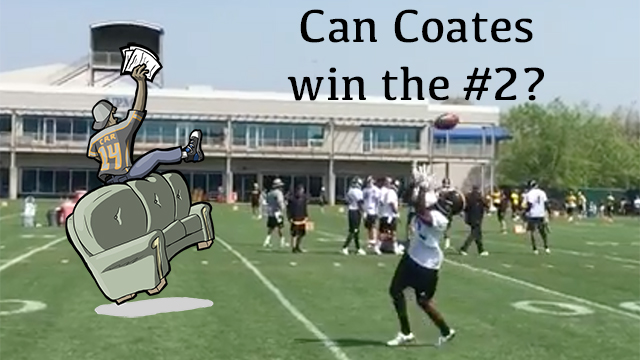 Sammie on the hot seat?

If Sammie Coates is trying to make a case for the starting job, he did not make a good preseason game one impression. He’s going to need a complete turnaround to beat out the other hungry hands on the depth chart.

Sammie came out earlier and had back to back bad plays in the second quarter. The first was a bobbled catch on a screen pass that got him little to no yardage. The bobble cost him an opportunity for big yardage. He must look the ball in before deciding to move. Coates then followed that up with a catch and fumble with two minutes left in the second. The Johnson Bademosi managed to use the crown of his helmet to pop the ball out and then Brandon Copeland of Detroit recovered the ball. Fortunately, his second fumble in the fourth quarter was recovered by his team.

Coates did have a nice 10-yard catch in the third where he did a little dance and stretch to get the first down. He’ll need to stack plays like this in order to help the coaches erase the first half from their memories.

Darius Heyward-Bey (DHB) already has a leg up on the former Auburn player by making a difficult catch at the back of the endzone earlier in the game. DHB is usually the player known with consistency issues; the Steelers don’t need a second guy with those problems.

I am not convinced. Not even a little bit.

As it looks right now, Marcus Wheaton is playing on the other side of arguably the best receiver in football Antonio Brown. Before tonight’s game, I was of the opinion that Sammie could make the push for Wheaton’s job. I am no longer convinced of this. Of course, when it is all said and done, Richard Mann and Mike Tomlin will have the final say. Coates may have to prove his worth in blocking and on special teams.

In the preseason, the buildup of bad plays can cost you dearly, when determining the final roster. Coates better hope the coaching staff is more forgiving, or that a couple more guys on his team pop positive on drug tests.

Listen! If you want to do more than just place in your league, subscribe to our email list (meaning the overlay you just opted out of. Just refresh the page and it will come back.). There I’ll be giving out exclusive tips to only those who sign up. No sign-up, no championship, no ice cream. “Remember Ice Cream is only for winners…”